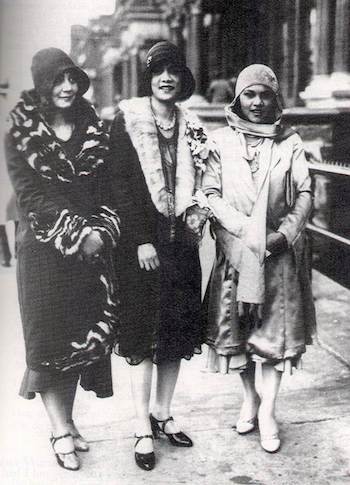 In the article below, independent scholar Robert Fikes Jr., explores a centuries-old process in the United States where African Americans with no visible African ancestry “pass” into the Caucasian race or other races to avoid the stigma associated with anti-black racial discrimination and social marginalization.  As he notes below, the process finally began to lose its appeal in the second half of the 20th Century.  He outlines a brief history of that process and suggests reasons for its decline.

Routinely shocking and sometimes lurid in detail, reports abound over three centuries of mixed-race persons lacking discernible African heritage masquerading as white: a Vassar student who proceeded toward graduation as informed school officials looked the other way; the man who abandoned his family in Atlanta and became a leading voice for fascism in the United States; a syndicated cartoonist who took his secret to the grave; an attorney who also changed his name and did not return home until retiring from a prosperous career on Wall Street; the Vaudeville actor-singer whose success vaporized when he was discovered to be “a Negro”; an assumed to be white New York Times editor and literary critic who also rose to captain in the segregated white  Army of World War II; and the guilt-ridden New England doctor and his wife who journeyed to the extreme in withholding the fact of being “Colored” from even their four children.

The opportunity for passing during the colonial and pre-Civil War eras most often resulted from the mating of slaveowner and slave followed by additional whitening and inbreeding of mulatto offspring who were then able to slip virtually unnoticed into the dominant society.  In the post-Reconstruction South politicians schemed to legally segregate the races which necessitated defining who was not white using a combination of percentages and the infamous “one drop rule,” condemning those with observable Negroid features to a life of greater hardship.  Unlike Brazil, a nation that had a larger 18th and 19th century black slave population than the United States, there was not a “mulatto escape hatch,” as historian Carl Degler termed it, that permitted those with the taint of slavery in their background to be more easily accepted across the spectrum of society.  A cause for anxiety for white Americans fearing racial contamination and degradation, but seen by many African Americans as a way of outwitting the system of oppression and making laughable fools of those who countenanced notions of white racial purity and supremacy, the extent of passing has never been reliably quantified by social scientists, hence estimates up to 1950 ranged from hundreds of thousands to several million blacks vanishing into the ranks of unsuspecting whites.

The complex predicament of persons living double lives passing as whites, deliberately or not, permanently or as a temporary convenience, intrigued a surprising number of major authors whose writings gave rise to the by now familiar trope of the tragic mulatto and the unveiled pretender.  Among the books that pursued this theme, The Slave (1836) by Richard Hildreth and Clotel; or, The President’s Daughter (1853) by William Wells Brown.  Post-emancipation works that pursued this theme include Maria Lydia Child’s A Romance of the Republic (1867), Mark Twain’s Pudd’nhead Wilson (1894) James Weldon Johnson’s The Autobiography of an Ex-Colored Man (1912), The House Behind the Cedars (1920) by Charles W. Chesnutt, Passing (1929) by Nella Larsen, the satirical Black No More (1931) by George Schuyler, Colcorton (1944) by Edith Pope.  Late 20th century works on passing include Oxherding Tale (1982) by Charles Johnson, Caucasia (1998) by Danzy Senna, and The Human Stain (2000) by Philip Roth.

Moreover, nonfiction accounts of passing have long fascinated the American public who read of compelling situations in newspapers and magazines and in books like A Man Called White (1948) by NAACP leader Walter F. White, and The Sweeter the Juice (1995) by Shirlee Haizlip, Life Along the Color Line (1995) by Gregory Williams, The Black Notebooks (1996) by Toi Derricotte, and Passing for White: Race, Religion, and the Healy Family, 1820-1920 (2002) by James M. O’Toole, One Drop (2008) by Bliss Broyard, and Incognito (2011) by Michael Fosberg.

Much less acknowledged is the fact of whites passing as black. In the 1800s there were documented cases involving poor whites kidnapped, declared mulatto, and sold into slavery. In the 1900s the typical scenario described whites as intimate partners of blacks or whites who lived among them and found it convenient to either manufacture black ancestry or did nothing to rectify the misconception folks had that they were part black. True stories of whites passing as African Americans that have been bestsellers are Black Like Me (1962) by John Howard Griffin; The Color of Water (1996) by James McBride; and Passing Strange: A Gilded Age Tale of Love and Deception Across the Color Line (2010) by Margaret A. Weiss.

Early 20th century popular novels and memoirs on passing also became film classics.  They include Fannie Hurst’s Imitation of Life (1933) which was made into films of the same title in 1934 and 1958), Cid R. Sumner’s Quality (1946) became the movie “Pinky” in 1949, William L. White’s Lost Boundaries (1948) and Reba Lee’s I Passed for White (1955), were also adapted into movies.  Yet by the time Lee’s novel appeared, the topic of passing had already lost much of its allure.  The book critic for the NAACP’s The Crisis magazine wrote that Ms. Lee’s story “may have attracted attention a quarter-century ago, but today it is such an ordinary phenomenon of Negro-white relations which no one but the morbid and curious pay any attention, except, perhaps, the individual concerned.  As a contribution to racial understanding it adds nothing . . . . (she) represents simply a neurotic, insecure personality far behind the times in sophistication and knowledge of interracial practices.”

Long after the “passing” novels left the bookshelves scholars began their investigations on black-white passing.  The Invisible Line: Three American Families and the Secret Journey From Black to White (2011) by Daniel Sharfstein represents one of the best examples of this new academic interest.  These studies however have expanded the scope of passing to include those who have denied being gay and posed as heterosexuals, switched genders, claimed a different white identity (e.g., Jewish to Anglo-Saxon), feigned membership in a wealthier social class, mislead others about their age, and more.

In researching the experiences of blacks who passed as whites, in her new book, A Chosen Exile: A History of Racial Passing in American Life (2014) Stanford University professor Allyson Hobbs offered a different perspective.  Fully aware that past research gave prominence to the supposed advantages of passing as white, when interviewed about her project she affirmed: “I am not interested in what people gained by being white, but rather in what they lost by not being black . . . . by rejecting a black racial identity.”  Numerous personal narratives in the book—some wrenching and heartfelt, others humorous and bordering on the absurd—reinforce her stance that passing for African Americans was, and remains, “a deeply individualistic practice, but it is also a fundamentally social act with enormous social consequences.”

The controversy that regularly surfaced for centuries surrounding light-skinned African Americans who resort to “passing,” that is to say, willfully concealing their African lineage to gain social and economic advantage by reinventing themselves, usually as Caucasian but also as Latino, Native American, and Asian, has become a relic of our nation’s past.  It was laid to rest by succeeding generations whose increasing interracial experiences mitigated prejudice. Triumphs of the Civil Rights Movement in the 1950s and 1960s, the institutionalization of affirmative action and equal opportunity in the workplace in 1970s and 1980s, the economic vitality of a surging black middle class, and seismic demographic shifts in the population over the past half century including the growing numbers of non-white immigrants from Asia, Latin American, and to a lesser extent, Africa, have permanently altered the white dominance.  These changes have, in turn, contributed to greater acceptance of intermarriage and pride in one’s biracial and multiethnic heritage.  It has also refocused social mobility in terms of class rather than race.  In this new multiracial landscape passing as white loses much of its immediacy and relevance.

Viewed in the contemporary context, what is the point of passing when there is so high an emotional toll (isolation, paranoia, guilt, self-hate, fear of being outed, etc.)?  Television commercials feature interracial families with bi-racial children; a list with photos of “25 Celebrities You Didn’t Know were African Americans” is posted on a popular Internet site and no one is panicked or outraged; black CEOs and board chairmen lead huge corporations like McDonald’s, Microsoft, Xerox, Merck, J. C. Penney, Aetna, American Express, and Sears; and U.S. President Barack Hussein Obama, the product of an interracial marriage, is at the helm of the world’s most powerful nation.

White privilege has not suddenly and dramatically diminished in recent years.  Rather, economic and social circumstances have reduced the temptation for persons whose racial pedigree was ambiguous to deny or blur their racial heritage.  Nearly forty years ago historian Nathan I. Huggins predicted the decline of passing in his short essay “Passing is Passé” when he succinctly opined that improved conditions fought for and won by blacks meant that the “insistence on race identity, race consciousness, race pride, and race beauty has made anachronistic the game of hide-and-seek, traditionally played by whites and blacks in America.”