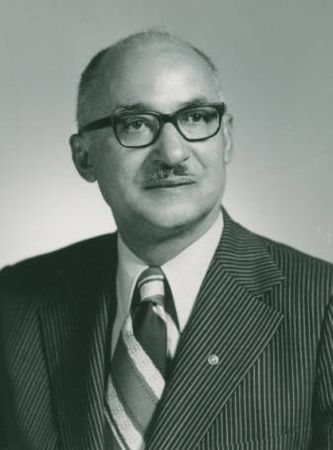 Lyman S. Parks was the first African American mayor of Grand Rapids, Michigan, serving in the role from 1971 to 1976.

Lyman S. Parks was born in 1917, although the details of his birth and childhood are unknown. He grew up in southern Indiana and in 1944 graduated from Wilberforce University and Payne Theological Seminary. That same year, he began working as a minister at the Wayman Chapel African Methodist Episcopalian (AME) Church in Kokomo, Indiana. For the next twenty years, Parks served as a pastor in various churches throughout Indiana and in Ann Arbor, Michigan.

In 1966 Parks moved to Grand Rapids, Michigan to serve as a pastor at the First Community AME Church. In 1968, he ran to become the representative for the Third Ward on the Grand Rapids City Commission. He won the position by over a thousand votes, largely through the support of his congregation, and became the first black commissioner in the city’s history.

Parks became mayor in 1971 by appointment from the city commission to fill the vacancy left behind by Robert Boelens when he resigned. Parks then ran for the office in 1973 with broad support including then Congressman Gerald Ford who later became Vice President and President.  Parks defeated ten other candidates, making him officially the first African American to be elected as mayor in Grand Rapids. He continued to serve as mayor until he lost his reelection bid in 1976. Throughout his years of service to the city he made a lasting influence on his community. He was recognized as an honest and charismatic leader who helped the city through a period of great social change and racial tensions. Parks’ major achievement in office was spearheading the renovation and revitalization of downtown Grand Rapids, helping to boost the town’s economy.

After his time as mayor, Parks returned to his work as a minister at the First Community AME Church where he worked until he retired from the position in 1985. At that point, Parks and his wife moved to Chicago, where he continued his work as a minister in Chicago’s Greater Institutional AME Church. He decided to retire permanently in 1999 and moved back to Grand Rapids.

In 2003, Parks was awarded the Giant among Giants Award, an annual award presented by the city of Grand Rapids since 1983 to recognize exceptional contributions by African Americans to the greater Grand Rapids community.

Parks spent the last year of his life living in an independent living facility with his wife in Lisle, Illinois. He died on November 4, 2009 at the age of 92 at a hospital in the Chicago suburbs. He died due to complications from a stroke he suffered only a few days prior. He is survived by his wife Cleo and their eight children as well as numerous grandchildren. In July of 2013, the city of Grand Rapids unveiled a memorial statue of Parks in honor of his numerous contributions to the city and its residents.