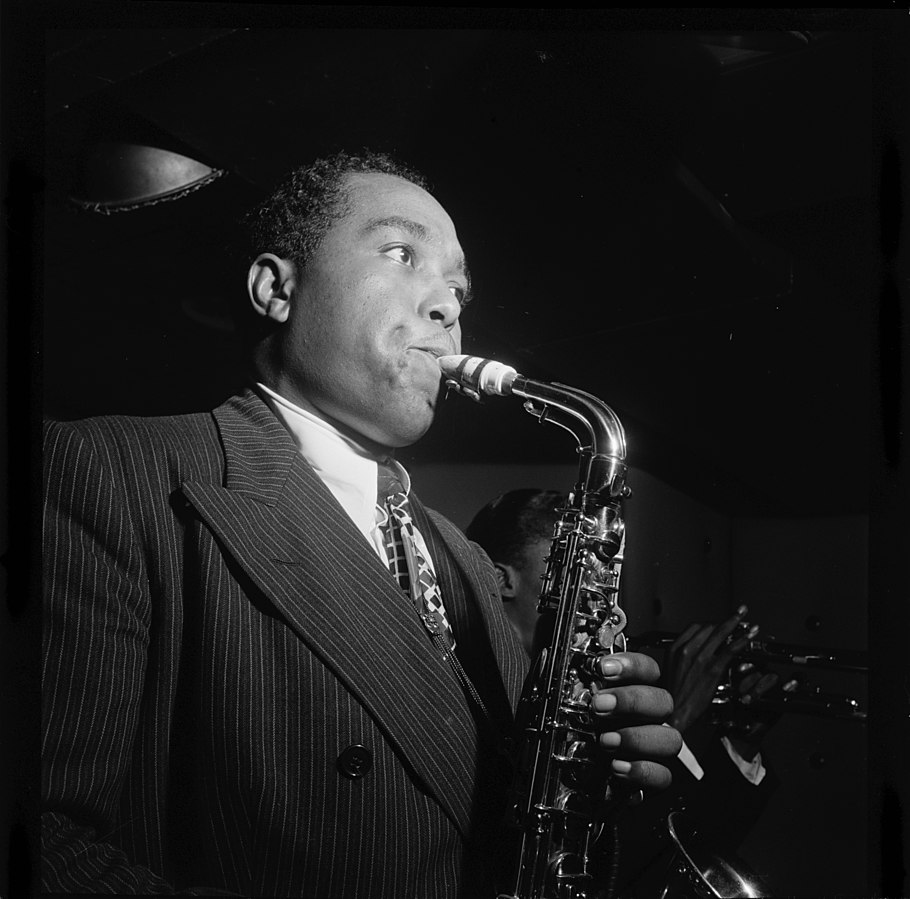 Alto saxophonist Charlie Parker was the most influential jazz musician to follow Louis Armstrong, and one of the music’s few true revolutionaries.  The style he helped to create, called bebop, or bop, established jazz as an intellectual music that was no longer viewed merely as entertainment.

Parker was born August 29, 1920, and grew up in Kansas City, Missouri.  He began playing alto and baritone horn in high school before switching to alto saxophone.  His talents were not immediately evident – he was once laughed off the bandstand at a jam session for playing in the wrong key.  He began practicing zealously, and soon came under the tutelage of saxophonist Buster Smith, and important early influence.  He spent weeks learning the recorded solos of Lester Young.

Parker left for New York in 1938, working as a dishwasher at a restaurant in order to hear its musical act, pianist Art Tatum.  In December of 1939, he was practicing with a guitarist when he had the idea to explore each chord’s higher intervals, a discovery that set his music on a new path.  Parker made his earliest recordings with Jay McShann’s band in 1940 and 1941.  He later joined Earl Hines’ band, where he first worked with trumpeter Dizzy Gillespie, and both played with the short-lived but influential Billy Eckstine Orchestra.  In early 1945, the two began co-leading an important band at New York’s Three Deuces club, and Parker started recording for the Savoy label.  Shortly thereafter they traveled to Los Angeles, introducing bebop to West Coast audiences.  Parker remained there, making a number of recordings for the Dial label.  His use of narcotics and heavy drinking caused a mental breakdown, landing him in Camarillo State Hospital for a six month recovery.

Upon his release, he recorded again for Dial, and then returned to New York.  A period of extraordinary creativity followed, and by 1949 he had created a remarkable body of recordings, establishing him as the leading jazz figure of his generation.  In his final years, his efforts to gain wider popular acceptance were hampered by increasingly erratic behavior, the product of too many years of heavy drug and alcohol use.  His body could no longer keep pace with this destructive lifestyle, and he died March 12, 1955 at age 34.

Parker did not invent bebop – by the early 1940s, Gillespie, Thelonious Monk and others were experimenting along similar lines – but his sheer brilliance and originality set him apart, defining the future of jazz and spawning legions of imitators on every instrument.  He fused elements of the blues, the riff-based Kansas City style, Lester Young’s melodic smoothness, and Art Tatum’s harmonic innovations to create a complex style of seemingly endless invention.