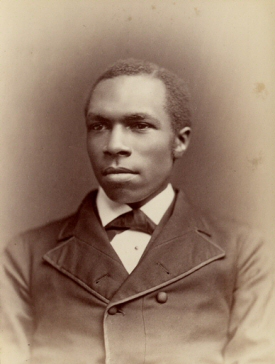 An outstanding educator and academic leader, Inman Edward Page was born in Warrenton, Virginia, on December 29, 1853. On the plantation where he and his parents were enslaved, Page was a houseboy. When he was about ten years old the Civil War brought Union and Confederate troops near their place and they took the chance to escape to freedom. Upon moving to Washington, D.C., Page worked and financed his education at local private schools including the forerunner to Howard University. He was among the first African American students admitted to Brown University, and was the first of two African Americans to graduate from the Ivy League institution.

Valedictorian of his class, Page gave the senior oration at the 1877 commencement. The Providence Journal reported favorably on his address. A member of the audience who heard Page’s speech recruited him to Mississippi for a teaching position at Natchez Seminary. From there he went on to a number of important educational appointments. In Oklahoma, Page served as president of Langston University for 17 years. He was also president of Missouri’s Western Baptist College and Tennessee’s Roger Williams University. In 1918, Brown University awarded Page an honorary Master’s degree.

Page also served as supervising principal of Oklahoma City’s segregated black schools for 12 years. As Ralph Ellison’s teacher at Frederick Douglass High School, he left a mark on one of the twentieth century’s greatest writers. In 1935, a year before his death, the city school system named him principal emeritus for his outstanding contributions. When he expired in the home of his daughter, Zelia N. Breaux in Oklahoma City, his passing was front-page news. Hundreds of friends, colleagues, and relatives attended his funeral in Oklahoma City, and even more were present for his burial on the Langston University campus. The main library at Lincoln University in Jefferson City, Missouri, is named for Page, a fitting tribute to his life in education.