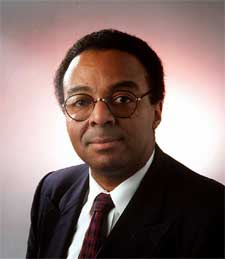 Clarence Eugene Page is a newspaper columnist, essayist, and political analyst.  His syndicated column which specializes in urban issues appears in numerous newspapers across the United States.

Page was born on June 2, 1947 in Dayton, Ohio to Clarence H. and Maggie (Williams) Page.  Page’s mother owned a catering service and his father was a factory worker.  Page has Attention Deficit Disorder (ADD) which was undiagnosed during his childhood.  He started reporting for his high school newspaper as a junior and found it to be a perfect match—perhaps, he says, because of ADD; news writing was short, and deadlines helped him stay on track.  After his senior year, Page took a summer job in a steel mill and made time to freelance.  He sold stories and photographs to two Ohio newspapers in the summer of 1965 as a 17-year-old high school graduate.

Page earned a bachelor’s degree in journalism from Ohio University in 1969 and started reporting for the Chicago Tribune right after graduation.  Six months later, he was drafted into the Army during the Vietnam War.  Page was assigned to public relations duty at Fort Lewis, Washington and in Germany.

Returning to the Tribune in 1971, Page was assigned to cover police, courts, religion, and neighborhoods.  He occasionally freelanced as a rock critic.  He reported on riots in Soweto, South Africa and the civil war in Rhodesia as a foreign correspondent in 1976.  He then returned to the Chicago Tribune with a promotion to assistant city editor.

In 1980 Page left the Tribune to direct the community affairs department at a CBS television station in Chicago.  His coverage of the Harold Washington mayoral campaign raised his profile, as he was called on to file stories for CBS’ national network, and to appear as an analyst on talk shows.

In 1984 the Tribune offered Page a position on its editorial board.  The opening came about due to the death, by suicide, of Page’s ex-wife Leanita McClain, who had sat on the board and had written a column for the paper.  Page accepted the offer, and filled both her seat and her column space.  Three years later, Page was syndicated.  In 1991 he moved to the Washington, D.C. area, where he continues to write for a national audience.

Page’s accolades include several honorary doctorates and two Pulitzers: a shared prize in 1972 for a series on vote fraud, and a sole prize in 1989 for commentary.  His collection of essays titled Showing My Color: Impolite Essays on Race and Identity, was published in 1996.  Clarence Page lives in Takoma Park, Maryland with his wife Lisa, and their son.