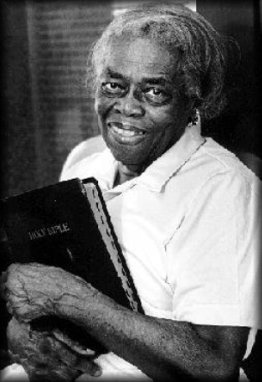 Oseola McCarty was a Mississippi philanthropist who donated most of her life savings, $150,000, to the University of Southern Mississippi to provide scholarships for African American students in need. A seamstress and washerwoman who was paid mostly in dollar bills and loose change her entire life, McCarty was praised for her generosity and received many awards, including an honorary degree from the university.

McCarty was born on March 7, 1908, in Shubuta, Mississippi. She was raised in nearby Hattiesburg by her aunt and grandmother, both of whom cleaned houses, cooked, and took in washing to make money. McCarty quit school in the sixth grade in order to care for her ailing aunt, and she took over the domestic work that she would do for the rest of her life. McCarty, who never married and had no children, lived frugally in a house without air conditioning. She never had a car or learned to drive, so she walked everywhere, including the grocery store that was one mile from her home. Her thriftiness would become legendary: she cut the toes out of shoes that did not fit right, and she bound her well-worn Bible with Scotch tape.

When she was eight years old, McCarty opened a savings account at a bank in Hattiesburg and began depositing the coins she earned from her laundry work. She would eventually open accounts in several local banks. By the time McCarty retired at age 86, her hands crippled by arthritis, she had saved $280,000. She set aside a pension for herself to live on, a donation to her church, and small inheritances for three of her relatives. The remainder—$150,000—she donated to the University of Southern Mississippi, a school that had remained all-white until the 1960s. McCarty stipulated that her gift be used for scholarships for Black students from southern Mississippi who otherwise would not be able to enroll in college due to financial hardship. Business leaders in Hattiesburg matched her bequest and hundreds of additional donations poured in from around the country, bringing the total endowment to nearly half a million dollars.

The first beneficiary of McCarty’s largesse was Stephanie Bullock, an 18-year-old honors student from Hattiesburg, who received a $1,000 scholarship. Bullock subsequently visited McCarty regularly and drove her around town on errands.

In 1998 the University of Southern Mississippi awarded McCarty an honorary degree. She received an honorary doctorate from Harvard University, and President Bill Clinton awarded her the Presidential Citizens Medal, the nation’s second-highest civilian award.

Oseola McCarty died of liver cancer on September 26, 1999, at the age of 91. In 2019 McCarty’s home was moved to Hattiesburg’s Sixth Street Museum District and turned into a museum.