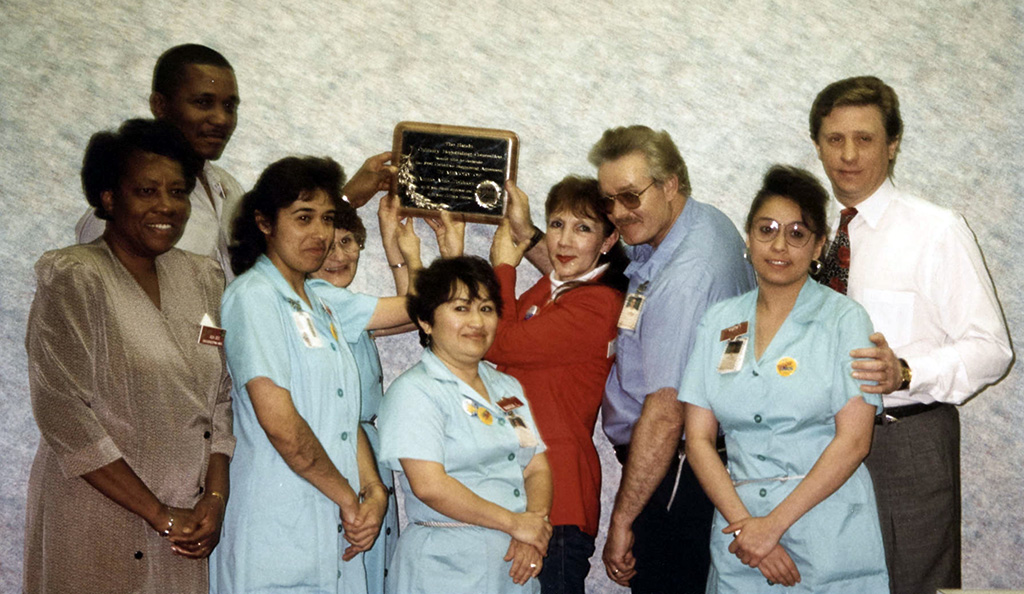 In February 2008, the Las Vegas Hotel and Culinary Workers Union Local 226 emerged on the national political scene with their high profile endorsement of presidential candidate Barack Obama. The union itself has a much older history that goes back to the late 1940s and is tied to the aspirations of thousands of mostly black maids and other service workers in the Las Vegas hotels. In the following article historian Christopher E. Johnson briefly explores that history.

The recent ascendance of the Las Vegas Hotel and Culinary Workers Union Local 226 illustrates the continuing relevance of race and working class agency in the postindustrial economy of the twenty-first century.  Organized in 1947 to recruit workers for Las Vegas’ burgeoning casino resort industry, the Culinary Union evolved into a powerful bargaining agent for the city’s increasingly multi-racial workforce.

Through the 1970s and early 1980s, the union’s future looked bleak.  In 1977, union president Al Bramlett turned up shot to death under a pile of rocks in the Mojave Desert, a victim of his mob ties gone bad. In 1984, in the midst of an economic slump, casino owners attempted to back out of a long-standing fair-wage agreement with the union.  After a bitter strike, the Culinary Union reemerged as one of the most potent labor organizations in the nation.

The union’s resurgence began in earnest in 1987 when organizers from the Hotel Employees and Restaurant Employees International Union helped mobilize Las Vegas’ large African American workforce for direct collective action.  Black workers had long been primed for union confrontation.  In 1960, local NAACP leaders planned a massive march on the Strip to protest segregation in the city’s booming casinos.  In response, paranoid executives and politicians quickly settled with black leaders in a landmark agreement to desegregate businesses in Las Vegas.  Well aware of the city’s sensitivity to blemishes on image, black residents continued to stage public protests through the 1970s.  By incorporating this combative African American contingent into its rank-and-file, the union was ready to assert influence in an expanding casino resort industry.

The union cemented its authority with an unlikely alliance.  Rather than challenge the casino industry head-on, the union capitalized on a wave of economic growth that began in 1988 when investment mogul Steve Wynn gambled $630 million on his Mirage Hotel and Casino, a world-class resort complete with jungle motifs, exotic white tigers, and a mechanized volcano that spewed fire and steam every half hour.  The visionary Wynn spared no expense in his effort to refashion the Las Vegas image for a mainstream American audience.  His 1989 agreement with the union to compensate workers with wages and benefits beyond anything they had earned from previous employers reflected the persuasion of the re-structured union and the shifting priorities of an image-conscious industry.

As Wynn and others well understood, workers were not only the human infrastructure of the casino business but also the most visible face of the industry.  Simple intangibles like a smile, a thank you, or a genuine show of concern from an employee could determine whether a customer returned to a given business, or recommended it to their friends and family.  As the nerve center of the city’s workforce, the Culinary Union stood on the front lines of this battle over image, and in postindustrial Las Vegas, the right image could mean untold profits.

Indeed, for Las Vegas’s corporate elite, the short-term gains of cutting labor costs seemed microscopic in comparison to the huge profits to be had by accommodating a unionized workforce and thus ensuring a positive image in the public eye.  Union membership grew alongside the industry, expanding from twenty thousand workers in 1984 to more than forty thousand by 1996.  Even more remarkable, over half of these new members were African American, Hispanic, or Asian, forming one of the most diverse unions in the nation.  By taking the lead in negotiating contracts with Steve Wynn’s Golden Nugget inc., Circus Circus Enterprises, Hilton Hotels, and other corporate investment groups, the Culinary Union secured a powerful voice for its growing multi-ethnic constituency.

The election of Hattie Canty to the presidency of the Culinary Union in 1990 signaled the new era of labor organization.  A black, widowed mother of ten and a former hotel maid, Canty brought a level of determination and leadership to the union that had been sorely lacking in the stagnant 1970s and 1980s.  With the forceful Canty at the reigns, the union could mobilize the entirety of its rapidly growing membership to exert significant pressure on uncooperative employers.  Casino magnate George Binion learned quickly the consequences of opposing the invigorated union, and in 1990 his ploy to cut labor costs sparked a nationally publicized strike.  Binion finally settled with the union in November of 1990, but not before loosing an estimated $16 million in gambling profits over the eleven month strike.

Then, in September 1991, the staunchly anti-union Elardi family opened the New Frontier with few amenities and a non-union workforce.  The emboldened Culinary Union struck immediately as other casino owners looked on from a cautious distance.  By failing to heed the lessons of recent history, the Elardis not only isolated themselves from the industry, they also vastly underestimated the resolve of the Culinary Union.  During the strike, not one union worker crossed the picket lines while other members increased their dues time and again to sustain a presence in front of the New Frontier.  Finally in 1997, under pressure from other owners including union-friendly William Bennet of Circus Circus who told Fortune magazine that “Las Vegas has enough of an image problem without the Frontier making it worse,” the Elardis were forced to sell the casino, suffering an estimated loss of $1 billion in profits.  After six years, the Culinary Union had won one of the longest strikes in American history.

In the midst of the Frontier strike, Robert Maxey, CEO of the MGM Grand and a notorious union buster, tried to bypass the union by setting wages that exceeded union demands.  Maxey’s arrangement left workers with no outlet for grievances, and in 1994, the Culinary Union mounted a strike.  On May 29, a remarkably diverse union membership (approximately twenty two percent African American, twenty five percent Latino, and seven percent Asian) gathered in front of the casino to demand a union contract.  Hattie Canty’s unifying presence at the helm dissolved most racial animosities and strikers discovered that solidarity could exert powerful influence in the city’s image-sensitive tourism industry.  By December, losses incurred during the strike prompted Kirk Kerkorian, the MGM’s billionaire owner, to replace Maxey with former Caesars CEO J. Terrance Lanni who immediately settled with the union, only to see profits skyrocket more than five hundred percent in 1995.

Union action also increased salaries for hotel workers.  By 1996, room maids could earn approximately $9.25 an hour; more than double the average wage for hotel maids in other cities.  For Hattie Canty, as with most unionized workers, these wages had enabled a middle class lifestyle.  As Canty explained in an interview with The New Yorker, “My house is paid for.  I bought cars while I was a maid.  I bought furniture.  I bought the things I needed for my family while I was a maid.  And the way I did it was through organized labor.”  This revelation demonstrated how far African American workers had come by mobilizing behind the union and asserting their economic influence.

By the mid-1990s, workers like Hattie Canty had internalized the malleability of image driving Las Vegas’s economic growth and learned how to use it to their advantage.  The union’s experienced African American leadership also paved the way for the city’s growing Hispanic and Asian immigrant populations who learned how to exert influence in Las Vegas’s dynamic service economy.  As traditional industries moved out of most American cities into the suburbs and then out of the country altogether, Las Vegas, the nation’s first postindustrial metropolis, became a bastion of opportunity for low skilled service workers.

Certainly, the union has not been a panacea for all of Las Vegas’s ills.  Nevertheless, its recent ascendance is a clear reminder of the significance of race and labor organization in the changing economy of the twenty-first century.  Through hard bargaining and collective action, the union enabled thousands of low skilled service workers to find steady work and respectable wages in Las Vegas’s postindustrial, tourism economy.  The history of the Culinary Union and its ties to the city’s prominent African American workforce provides a revealing glimpse into the future of race relations and working class agency in the nation’s shifting urban landscape.

Sara Mosle, “Letter from Las Vegas: How the Maids Fought Back,” The New Yorker (February 26/March 4, 1996, 148-156; Hal Rothman and Mike Davis, eds., The Girt Beneath the Glitter: Tales from the Real Las Vegas (Berkeley: University of California Press, 2002); The Hotel and Culinary Workers Union Local 226, The Culinary Worker (Fall 2000) available online at http://www.culinaryunion226.org/images/41841_CulinaryNewspaperFall%2007.pdf