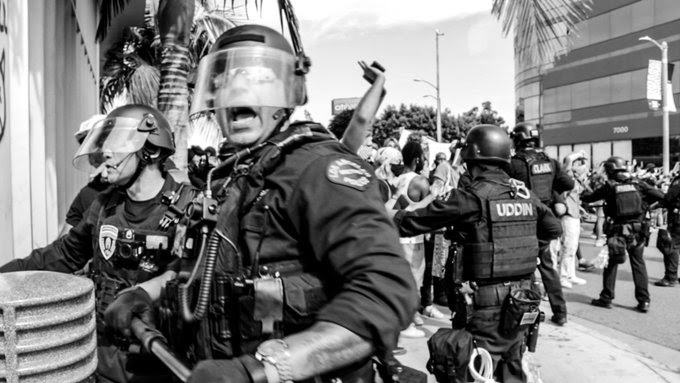 Operation Hammer, a law enforcement program by the Los Angeles Police Department that began in 1987 was ostensibly an attempt to crack down on gang violence in Los Angeles, California. Many critics, however, saw the operation as racial profiling because it targeted the city’s African American and Hispanic youth.

The origin of Operation Hammer can be traced back to the 1984 Summer Olympics which were held in Los Angeles, California. Under the supervision of Los Angeles Police Department (LAPD) chief Darrel Francis “Daryl” Gates, the LAPD expanded gang sweeps during the Olympics ostensibly to protect the tens of thousands of outside visitors and Los Angeles residents expected to attend the games. Many of the events were scheduled for the Los Angeles Colosseum located in South Central Los Angeles, a major area of gang activity. The main areas the LAPD targeted were South Central and East Los Angeles and the tactics used included mass arrests and detention of suspected gang members.

Yet, even after the Olympics ended, the LAPD used old anti-syndicalist laws designed to curb the activities of 19th Century labor activists and political radicals, against members of the two largest 1980s gangs, the Crips and the Bloods. Again, the LAPD arrested hundreds of Black and Hispanic boys and young men who were “suspected” gang members. Despite these arrests, many of them were never charged with a specific crime and were subsequently released.

In April 1987, the LAPD began Operation Hammer after a group of people were shot on their front lawn in a drive-by shooting at a birthday party in South Central Los Angeles. Chief Gates responded by a round-up of gang members. Arrests of suspected gang members continued through 1987 and into 1988. At the height of Operation Hammer in April 1988, 1,453 people were arrested by one thousand police officers in South Los Angeles on a single weekend.

Citizens who weren’t suspected gang members also were victims of Operation Hammer. On August 1, 1988, 88 LAPD police officers raided two apartment buildings located on the corner of 39th Street and Dalton Avenue. When the police arrived, they searched for drugs and in the process caused massive property damage, including smashing furniture, punching holes in the walls, and destroying family photos. The police sprayed graffiti messages such as “LAPD Rules” and “Rollin 30’s Harlem Crips” Die. These tactics were clearly designed to intimidate both drug members and apartment residents who were believed to be sheltering them and protecting their criminal activity. During the raid many residents in the apartment building and neighborhood were rounded up, beaten, and humiliated. Despite these brutal tactics, the police raid netted fewer than six ounces of marijuana and less than an ounce of cocaine.

By the time Operation Hammer ended in 1990, it was estimated that over 50,000 people had been arrested in its raids. The LAPD arrested far more young black men and women than even in the 1965 Watts Riots. Operation Hammer clearly employed racial profiling that targeted African American and Hispanic youth. The anger and frustration from that profiling as well as the police assault of motorist Rodney King contributed to the Rodney King Riots in 1992.