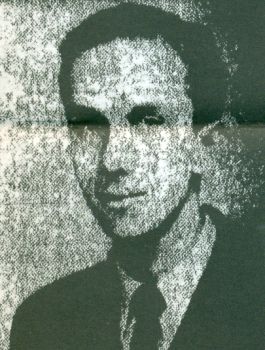 Born in Norfolk, Virginia in 1921, physicist Robert Johnson Omohundro was one of a select few black scientists and technicians to work on the Manhattan Project and thus contribute to the development of the atom bomb during World War II.  The eldest child of Henry Omohundro and Brownie Pierce Omohundro, Robert had one sister, Gladys and four half-siblings, Joseph, Mildred, Annie Mae, and Dorothy from his father’s first marriage.

Omohundro graduated from Booker T. Washington High School in Norfolk, Virginia and then earned a bachelor’s degree in mathematics and a master’s in physics from Howard University in Washington, DC.  After graduation he worked as a radio tester with the Western Electric Company.

Omohundro’s contribution to the atom bomb project was his work as a mass spectroscopist.  Mass spectrometry (MS) is a common technique that scientists use to help identify particles in samples by their mass. During World War II Omohundro, who worked at a secret facility in Arizona, was also responsible for developing devices to locate and measure radiation emissions from atomic warheads. These devices were used long after World War II by the International Atomic Energy Agency in airports around the world to detect clandestine transfers of fissionable material and portable neutron detectors.

From  1948 to 1984, Omohundro applied the techniques of nuclear physics honed during his work on the Manhattan Project to developing technology at the Naval Research Laboratory in Washington, DC.  He was noted for his development of devices that prevent the propagation of plutonium at airfields.  In addition, he continued his World War II research by designing more advanced devices for radiation detection from nuclear warheads.  In 1963 and 1971, he obtained two patents in the field of nuclear physics.  Over the course of his career Omohundro authored and co-authored 40 scientific articles.

Omohundro was a member of the American Physical Society, the Research Society of America, and Alpha Phi Alpha Fraternity.
https://www.blackpast.org/wp-admin/media-upload.php?post_id=9944&type=image&TB_iframe=1
Robert Johnson Omohundro died of cardiac arrest at George Washington University Hospital on May 15, 2000 in Washington, DC.  He was 78 years old.