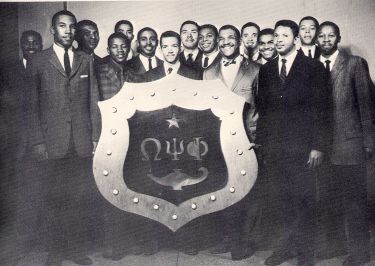 Omega Psi Phi Fraternity, Incorporated, one of the five fraternities for African American men, was founded on November 17, 1911 on the campus of Howard University in Washington, D.C. It is the first African American fraternity established at a historically black college. The three founders—Edgar A. Love, Oscar J. Cooper, and Frank Coleman—established the fraternity in the belief that “friendship is essential to the soul.” Out of this idea was born the guiding principles of the fraternity: Manhood, Scholarship, Perseverance, and Uplift. Love, Cooper, and Coleman extended the status of founder to their faculty advisor, Dr. Ernest Everett Just, who would eventually become a world-renowned biologist.

From its inception, the fraternity worked to encourage scholarship and uplift among African Americans. In 1927, Omega member Carter G. Woodson persuaded the fraternity to become the first national organization to sponsor National Negro Achievement Week each February. The annual observance has now evolved into Black History Month.

The fraternity continued its public service over the decades. In 1948 it established theCharles R. Drew Scholarship Fund, named after a prominent Omega scientist. In 1955 the fraternity donated the first annual gift of $50,000 to the United Negro College Fund. In the 1960s many Omegas took part in sit-ins, protests, and marches. Today, each of the 700 chapters is required to maintain a Life Membership at Large in the National Association for the Advancement of Colored People (NAACP). In 1981, the fraternity endowed its first faculty chair at Rust College in Holly Springs, Mississippi. Omega’s health initiatives include the annual Charles Drew Blood Drive, AIDS/HIV awareness discussions, and support for the programs of the American Diabetes Association. Through its current scholarship program the fraternity supports African American undergraduates in various institutions across the nation.