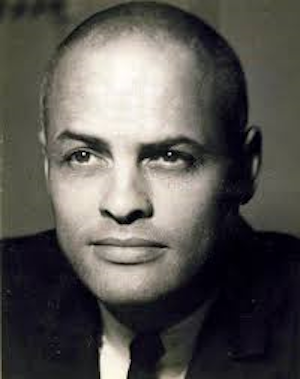 The graphic designer George Elliot Olden, known for his work in television and advertising, was born in Birmingham, Alabama on November 13, 1920. Olden’s father, James Clarence Olden, was a Baptist minister and his mother, Sylvia Ward Olden, was a music teacher. When he was only a few months old, Olden’s family moved to Washington, D.C. so his father could serve as a minister in the Plymouth Congregational Church. Then, in 1933, Olden’s father mysteriously left his family in the same year that Olden began attending all-black Dunbar High School where he was first exposed to cartooning and art.

Following high school he enrolled in 1937 at Virginia State College in Petersburg, Virginia. In 1939, Olden’s mother died and two years later while he was still at Virginia State he married Courtenaye MacBeth. In 1942, shortly after the attack on Pearl Harbor, Olden dropped out from Virginia State College to begin working at the newly created Office of Strategic Services as a graphic designer. Here Olden designed posters that promoted conservation and rationing and he published cartoons in National CIO News, a leading labor union journal, The New Yorker, and Esquire.

As his reputation grew in the publishing business, Olden removed the last letter from his first name in order to get himself noticed by magazine editors. After World War II ended in 1945, Olden’s supervisor recommended him to the vice president of the CBS TV division and the agency’s communications director, Colonel Lawrence W. Lowman. Soon afterwards Olden at 24 became the head art director for CBS’s new television division. As such he was one of the first African Americans to work in the newly evolving television industry. Soon after joining CBS, Olden was also invited to attend the San Francisco conference that eventually led to the formation of the United Nations. He was named the official graphic designer for what would be the U.N. International Secretariat. Olden was selected for the post by Edward R. Stettinius, the U.S. Secretary of State at that time.

Olden remained with CBS until 1960. In that year he joined the art department of Batten & Batten & Durstine & Osborn (BBDO), one of the nation’s largest advertising agencies. In 1963, Olden left BBDO to join the advertising agency McCann-Erickson. That same year, Olden became the first African American to design a commemorative postage stamp for the U.S. Post Office. His stamp was a tribute to the Emancipation Proclamation at its 100th anniversary.

In 1966, Olden divorced Courtenaye MacBeth, his wife of 25 years and married Terri Phillips Baker. The couple had one child, Georg Olden, Jr. In 1970, Olden was laid off by McCann-Erickson and soon afterwards charged the agency with racial discrimination, claiming that his firing was designed to prevent him from gaining senior executive status. The discrimination case failed, prompting Olden to turn to the Center for Constitutional Rights, which filed a class-action lawsuit against McCann Erickson in U.S. District Court in New York. By now, however the decline of his career caused his estrangement from Terri Baker Olden prompting him to move in with his new girlfriend, Irene Mikolajczyk. On January 25, 1975, Olden was shot and killed by Irene. He was 54 at the time of his death.