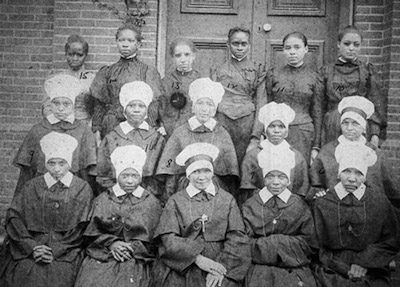 The Oblate Sisters of Providence was the first successful order of Roman Catholic nuns of African descent. Establishing an order of black sisters first started in Kentucky in 1812 under the encouragement of a Belgian priest, Father Charles Nerinckx. Nerinckx helped found the Friends of Mary at the Foot of the Cross, which later became the Sisters of Loretto, a racially diverse school for girls. When three young women of African descent graduated from the school, Nerinckx encouraged them to become postulates.  This first community of black nuns, however, did not survive after Nerinckx’s death.

Five years later, a Sulpician priest, Jacques Hector Nicholas Joubert de la Muraille, started an order for black nuns in Baltimore, Maryland. With Elizabeth Lange as their mother superior, three women of Haitian descent professed their vows on July 2, 1829.  They chose as their patron the Blessed Virgin, with St. Benedict the Moor as their second patron. Their feast day was the Visitation on July 2, and their motto eventually became “Providence will Provide.”

On October 2, 1831 Pope Gregory XVI blessed the Oblate Sisters of Providence, and the following year the community joined the Association of the Holy Slavery of the Mother of God.  Their first habit consisted of a black dress and white collar with a white hat.  The order later amended the uniform and changed the white hat to black and added a black cape.

The Sisters first operated a small school for Haitian children where French was spoken, making it easier for the children to take part in religious studies without a language barrier. The school grew, eventually leading to the founding of St. Frances Academy in 1828, the first Black Catholic School for children in Baltimore.  St. Frances Academy is still in operation today, making it the oldest continuously operating school for African American Catholic children in the United States.

By 1832 the Sisters also administered to the indigent and especially those with cholera during an epidemic, but their real work was to teach African American children.  The school proved successful, and the Sisters bought more property, expanded the school, and built a new chapel.  This chapel was significant because not only was it used for the Sisters’ worship, but it was the first chapel for black Catholics where they could pray and receive the sacraments in Baltimore.

In the 1860s, the order fell into the directorship of the Society of Jesus (Jesuits) and eventually moved to other areas in the United States, including Philadelphia, Pennsylvania in 1863 and New Orleans, Louisiana in 1867. With the establishment of the Josephites, an order of priests whose mission was to administer to African American Catholics, they assumed the directorship of the Oblates in 1871 and continued to aid and help expand the work of the Sisters with the opening of additional schools and orphanages.

By 1900, the order traveled back to Mother Lange’s home in Cuba and opened several schools, but left in 1961 when Fidel Castro came to power.  Today the Sisters continue to maintain a vibrant community, especially in the American South, the Caribbean, the Dominican Republic and Costa Rica.

http://www.oblatesisters.com/; Diane Batts Morrow, Persons of Color and
Religious at the Same Time: The Oblate Sisters of Providence 1828-1860.