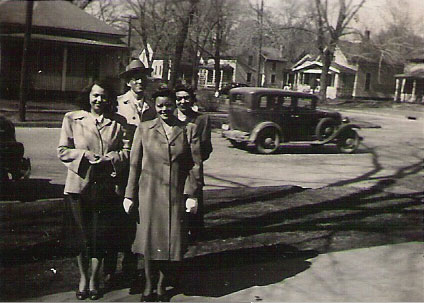 The Oak Hill neighborhood of Cedar Rapids, Iowa, had in the first decade of the 20th Century been the residence of well-to-do white families.  Over the next two decades it was transformed from the addresses of the affluent into a working class neighborhood.

During the 1920s, Oak Hill became home to newly arrived immigrant families from Eastern Europe and Mexico. The majority of blacks who settled on Oak Hill came from two places, the coal fields of Buxton, Iowa—a mining colony with a large black population—and the Deep South.  Both newcomer groups came in search of a better life for their families. Despite the emergence of this community, the total black population of Cedar Rapids in 1930 was two percent of the total.

Oak Hill had its own color line.  One prominent but anonymous Cedar Rapids businessman said in the early 1920s that “by common consent that is the area where the Negroes have been confined.”  Although many black Oak Hill residents may have questioned the idea of “common consent,” this African American community nonetheless became a visible part of the city.

The African American church played an important role in many of the social functions on Oak Hill. There were about a dozen black churches, however the majority of the black community were members of the Bethel African Methodist Episcopal Church or the Mount Zion Baptist Church.

By the 1940s most black men in Oak Hill worked for Wilson Meat Packing where they performed the dirtiest jobs, usually those associated with the slaughtering of the animals.

By the late 1960s, urban renewal arrived in Cedar Rapids with the national War on Poverty campaign.  Many Oak Hill residents were forced out of their homes.  About the same time the meat packing plant began to automate and other small factories closed, eliminating work for many of Oak Hill’s residents.  What once was a thriving working class neighhood of modest but tidy homes descended into a community dominated by urban blight, drugs, and crime. Today, however, Oak Hill is experiencing a long anticipated revitalization as new homes are built and businesses are again moving into the neighborhood.