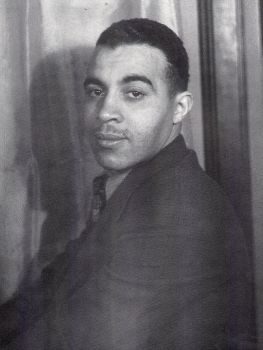 Richard Bruce Nugent (also Bruce Nugent), artist, writer, actor, dancer, dilettante, and bohemian of 1920s Harlem, was born to middle class Washington, D.C. socialites Richard Henry Nugent and Pauline Minerva Bruce Nugent. His father was a Pullman porter; his mother a pianist. Nugent attended Washington, D.C.’s Dunbar High School where one of his teachers was the writer Angelina Weld Grimké. After his father’s death, Nugent’s mother moved with her two sons to New York City where the then thirteen-year-old Richard worked at various odd jobs through age eighteen. In New York City he “discovered Harlem,” which was then becoming the “Black Mecca” of African Americans during the “Jazz Age.”

When Nugent told his mother he had decided to become a writer, she sent him back to Washington, D.C. to live with his paternal grandmother. There Nugent began to frequent the Saturday salons hosted by poet Georgia Douglas Johnson for writers, artists, and intellectuals including Dr. Alain Locke who was editor of The New Negro: An Interpretation, the anthology that signaled the emergence of the Harlem Renaissance. Douglas also introduced Nugent to its poet laureate, Langston Hughes. Shortly thereafter, Nugent followed Hughes back to Harlem, where he was introduced to Hughes’s circle of friends and literary luminaries.

Despite his ubiquitous presence in Harlem and intimate friendships with leading figures of the Renaissance, Nugent remained a minor player among the giants of that cultural movement. He nonetheless established a place for himself among Renaissance stars such as writers Hughes, Wallace Thurman, and Zora Neal Hurston when he in 1926 became one of the co-editors of Fire!!!, a short-lived avant-garde journal which would represent the true voice of the younger generation of African American writers.

Nugent published “Smoke Lilies and Jade,” his now signature short story in which homosexuality is the central theme, in the first and only issue of Fire!!!  Like Nugent, Alex, the story’s protagonist, proudly embraces his gay orientation and lifestyle declaring, “You see, I am a homosexual. I have never been in what they call ‘the closet.’  It never occurred to me that it was anything to be ashamed of, and it never occurred to me that it was anybody’s business but mine.” Unlike his more closeted renaissance peers, including Hughes, Thurman, Hurston, and Claude McKay, Nugent was an unabashedly happy, openly same sex loving man, an identity that may have cost him a more prominent publishing career. Nevertheless, Nugent’s credits included publication in the journals Crisis and Opportunity as well as in Locke’s New Negro anthology, a role on Broadway in Du Bose Heyward’s Porgy from 1927 to 1928 which included the London cast of the play, and much later as Co-Chair of the Harlem Cultural Council in the 1960s.

In 2002, Duke University published Gay Rebel of the Harlem Renaissance: Selections from the Work of Bruce Nugent, edited by Thomas Wirth. Nugent also posthumously co-starred with Anthony Mackie in “Brother to Brother” (2004), a film about what it meant to be a black gay artist in the past and what it means to be one today.  His heretofore unpublished first novel, Gentleman Jigger, was published in 2008 by Da Capo Press, more than seventy years after he wrote it and twenty one years after his death in New York City.