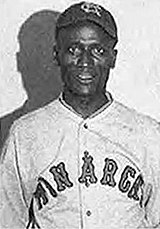 Norman “Turkey” Stearnes was one of the Negro League Baseball’s (NBL) most feared hitters. Born on May 8, 1901 in Nashville, Tennessee to Will S. and Mary (Everett), Stearnes, his mother was a cook for a private family earning $7 a week and was listed as a widow on the 1910 census. Stearnes had siblings, Louella, Lorenzo, and Annie. He attended Belleview Elementary School and Pearl High School in Nashville and has been described as quiet and unassuming. Believed to have been given the nickname “Turkey” because of his unique running posture, Stearnes claimed the name was attached because he had a potbelly as a child.

Stearnes was unable to continue school after his father died and had to work to help provide for the family. Taking odd jobs such as caretaker for hogs and cows, grocery store worker, wagon driver, and grocery deliver person, he also worked for the Baptist Publishing Board as a janitor and errand runner. Stating that he knew he would not be able to go to college, Stearnes did complete high school in 1922.

Sports being an outlet from school and chores, Stearnes learned to play baseball while attending high school. He began his career in professional baseball in 1920 with the Nashville Giants and then at the age of 22, he traveled north in 1923 and play for the Detroit Stars. Hitting better than .300 in 14 of 19 seasons, collecting six home run titles and leading the league in triples four times, Stearnes is credited with 176 home runs, the all-time NBL record and a .621 career slugging percentage. He played in four east-west all-star games in his 11 seasons with the Detroit Stars.

Winning the Negro Southern League pennant in 1932 and the Negro National League pennant in 1933 while playing with the Chicago American Giants, Stearnes played in a four-team doubleheader at Yankee Stadium in front of 30,000 fans in 1934, which at the time was the largest crowd ever to watch a black baseball event. Despite his success on the field, the Great Depression ended the ability of the Detroit Stars and other teams to pay salaries. Consequently, Stearnes moved around a lot, playing for the New York Lincoln Giants, Chicago American Giants, Philadelphia Stars before retiring in 1942 with the Kansas City Monarchs. Also, during off season (winters) Stearnes worked in a factory owned by Walter Briggs, who also owned the Detroit Tigers. At the time Stearnes was banned from this all-white team because of his race.

In 1946, Stearnes married Nettie Mae Radcliffe, a schoolteacher and niece of Birmingham Black Barons manager, Ted “Double Duty” Radcliffe. Eventually he retired from the Ford Motor Company with a good salary. He lived out the rest of his life comfortably in a house where he paid the mortgage in full without relying on financial help from others.

Norman Thomas “Turkey” Stearnes died from cancer on September 4, 1979 in Detroit, Michigan at the age of 78. Buried in Lincoln Memorial Park Cemetery, Clinton Township, Macomb County, Michigan, Stearnes was posthumously inducted into the Baseball Hall of Fame in 2000. His wife, Nettie Mae, was instrumental in his induction. Stearnes has two daughters, Rosilyn (Brown) and Joyce (Thompson).