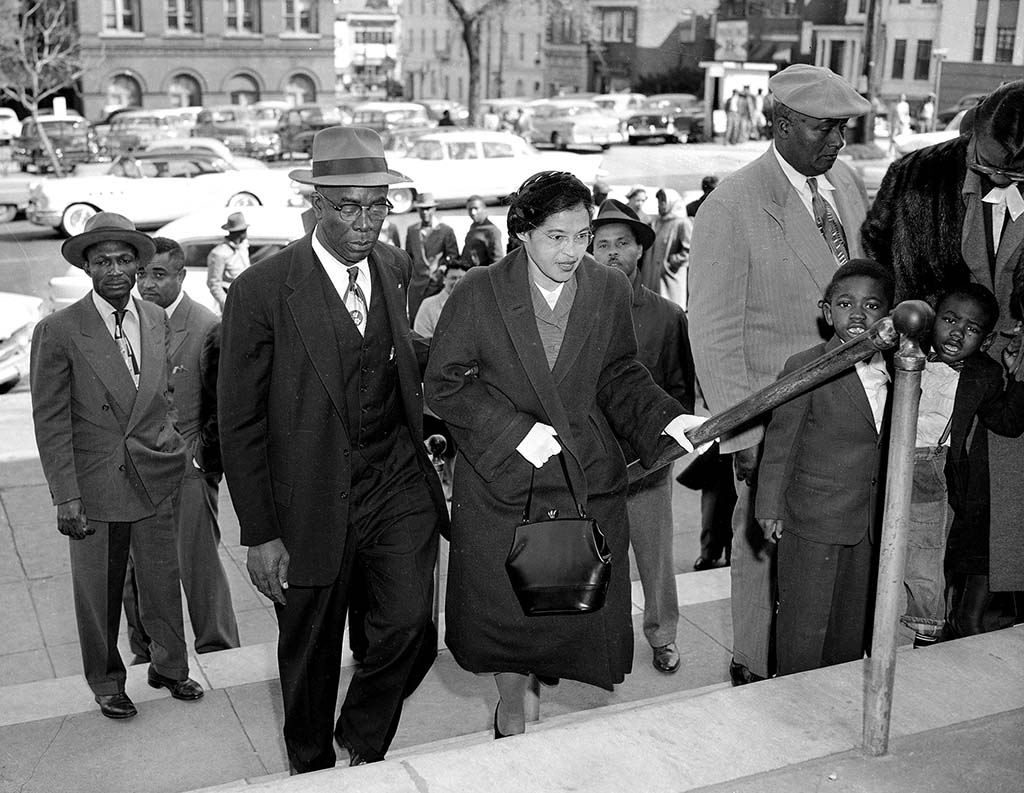 Edgar Daniel Nixon, an African American civil rights leader and union organizer, is remembered primarily for helping lead the Montgomery Bus Boycott in Alabama from 1955 to 1956.  E.D. Nixon was born to Wesley M. Nixon, a Baptist minister, and Sue Ann Chappell Nixon, a maid-cook, in Lowndes County, Alabama on July 12, 1899.  Due to his mother’s death as a young boy, Nixon lived with various family members during his childhood and received little formal education.

In the early 1920s, he found a job as a Pullman sleeping car porter and was exposed to Jim Crow policies throughout his travels on the trains.  In 1928 he met A. Phillip Randolph, the recently elected leader of the Brotherhood of Sleeping Car Porters Union.  The union called for higher wages and better working conditions for black porters and Randolph persuaded Nixon to become a union organizer.

In the early 1940s, Nixon organized the Alabama Voters League.  He was responsible for leading a 750-person march on Montgomery County Municipal Court House in 1944 to challenge racist policies regarding black voting.  This was the first major protest march in Montgomery since the Reconstruction era.  In 1945, Nixon was elected president of the Montgomery Branch of the National Association for the Advancement of Colored People (NAACP) and two years later, in 1947, he became the state president of the NAACP.

In the early 1950s, Nixon played a crucial role in convincing the Montgomery Police Department to hire the first African American policemen.

It was the Montgomery Bus Boycott, however, that gave Nixon national fame.  On December 1, 1955, Nixon posted bail for Rosa Parks after she was arrested for refusing to give up her seat to a white male passenger.  That arrest initiated a series of events that led to the boycott.  Nixon arranged for Clifford Durr, a white attorney, to represent Parks in court and then he and other Montgomery blacks organized the Montgomery Improvement Association (MIA).  Nixon persuaded Rev. Martin Luther King, Jr., a relative newcomer to the city, to become the MIA’s first president.

The leaders of MIA, including Nixon, organized the Montgomery Bus Boycott in which Montgomery’s black citizens refused to ride public transportation for 381 days to protest racial discrimination.  Nixon’s activism prompted bus boycott opponents to bomb his home on February 1, 1956.  Nixon was not there at the time.

On June 3, 1957, Nixon left the MIA to protest what he saw as the domination of the organization by middle class leaders who refused to share power with low income black men and women.  Despite his prominence in the Montgomery Bus Boycott, he played no role in the Alabama civil rights struggles of the 1960s.  Instead he worked as recreation director for the city’s public housing projects.  E.D. Nixon was given the NAACP’s Walter White Award for public service in 1985.

Edgar Daniel Nixon died on February 25, 1987 in Montgomery at the age of 87.  In 2001, to honor his work as a civil rights leader the Montgomery County Public School System named an elementary school after him.