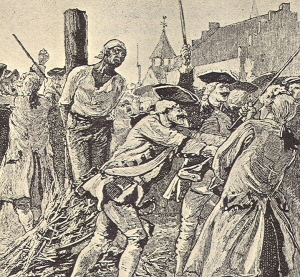 The New York Slave Conspiracy of 1741 is an extraordinarily complex story. Some historians have dismissed the idea that slaves actually conspired to overthrow chattel bondage and gain their freedom, while others have argued that the events in New York were part of a mixed rebellion of the Atlantic proletariat. What is clear about this incident is that it is an example of an abuse of power and a misuse of law and community values by white colonists.

Between the months of March and April, ten fires blazed in the city, culminating with four fires on a single day in early April. A grand jury concluded that the fires were the work of black arsonists who had ties to a larger conspiracy to burn the city and murder all the white people. More than a hundred slaves were brought into the basement of the city hall on charges of burglary, arson and insurrection. Thirteen slaves were burned at the stake, and 70 others were sold into the backbreaking slavery of the Caribbean. Two white men and two white women were also hanged. Seven other whites were permanently expelled from New York City.

Critics from New England accused the New Yorkers of imagining the plot and did not hesitate to point out similarities between the events of April 1741 and the Salem, Massachusetts witch trials of 1692. In fact, the nature of the confessions closely resembled the confessions at Salem. During their interrogation, slaves were beaten, harassed and heckled by whites. These tactics probably contributed to the confession of eighty-one blacks. After the confessions, executions and deportations, the New York Assembly expanded its night watch, passed a restriction on slaves fetching water at any but the nearest pump and decided to import its slaves no longer from the Caribbean, which had previously supplied New York with nearly three-fourths of its slave population, but from Africa instead because the colonists believed that African slaves were less likely to organize than slaves from the Caribbean.