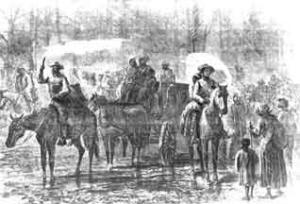 Between twenty-five and fifty blacks congregated at midnight in New York City, New York on April 6, 1712. With guns, swords and knives in hand, the slaves first set fire to an outhouse then fired shots at several white slave owners, who had raced to scene to fight the fire. By the end of the night, nine whites were killed and six whites were injured. The next day the governor of New York ordered the New York and Westchester militias to “drive the island.” With the exception of six rebels who committed suicide before they were apprehended, all of the rebels were captured and punished with ferocity ranging from being burned alive to being broken at the wheel.

But the swift punishment of the guilty was not enough to quell the concerns of slave owners and their political body. Within months, the New York Assembly passed “an act for preventing, suppressing and punishing the conspiracy and insurrection of Negroes and other slaves.” Masters were permitted to punish their slaves at their full discretion, “not extending to life or member.” Even the manumission of New York slaves was deterred by this bill; masters were required to pay two hundred pounds security to the government and a twenty-pound annuity to the freed slave. Despite these stringent laws, New York would escape slave rebellion for only twenty-nine years.