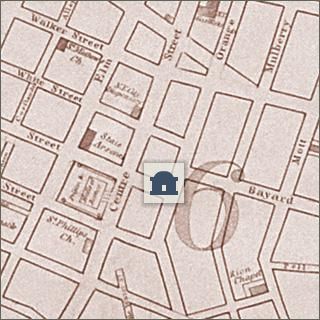 In 1808, the New York African Society for Mutual Relief was formally organized to assist widows and orphans, pay burial expenses for its members, and to serve as a brokerage house to buy real estate. The Society was the most successful 19th Century attempt by New York’s African American artisans and craftsman to buy real estate for investment purposes.

The society’s first president, William Hamilton was a carpenter and its first secretary, Henry Sipkins, was a mechanic. Hamilton was reputed to be the son of Alexander Hamilton, while Sipkins was called “the Jefferson of his people” for his powerful speeches supporting abolition.

In 1820, Juliette Toussaint wife of Pierre Toussaint, the leading hairdresser in antebellum New York, bought a tenement in the heart of the Five Points section of Manhattan, and an adjacent building in the rear for a Meeting Hall for the NYASMR. Located at 42 Orange Street, (today Baxter Street), the purchase price was $1,800. Since monthly dues were $0.25, the gift was substantial. Moreover, the building became a stop on the Underground Railroad harboring fugitive slaves headed for upstate New York or Canada.

By the early 1830s the area of Five Points (where five street corners converged) began to decline. The center of the neighborhood sat on a former collection pond. The springs that fed the pond were never adequately closed and by the 1830s the NYASMR building and others in the neighborhood were literally sinking. Moreover, Five Points was fast becoming the center of a large immigrant community, prompting many black residents to leave the area.

The 1834 anti-Abolition riots which were directed at African Americans, finally forced NYASMR leaders to abandon the building. During the riots its stained-glass windows were destroyed and the interior of the Meeting Hall was trashed. Shortly thereafter, the Society moved to Greenwich Street and then to W. 66th Street, which was becoming the new 19th century African American enclave for New York City.

The violence, however, did not diminish the economic strength of the NYASMR. In 1852, its annual business report showed $192.75 in membership dues, while rental income from member-owned properties amounted to $2,000. By 1860, the Society had assets of $15,000 and was the only black organization in the United States whose financial success could be attributed to real estate investment.

The New York African Society for Mutual Relief combined support for widows and orphans, and burial insurance for members with both public and covert abolitionists activities and successful real estate investment and capital accumulation. In doing so it became the most successful 19th century example of the blending of social justice and entrepreneurial capitalism. By the 1940s, however, its voluntary membership began to dwindle as New Yorkers found other outlets for social and economic activity and support. The Society finally closed its doors at the end of World War II.