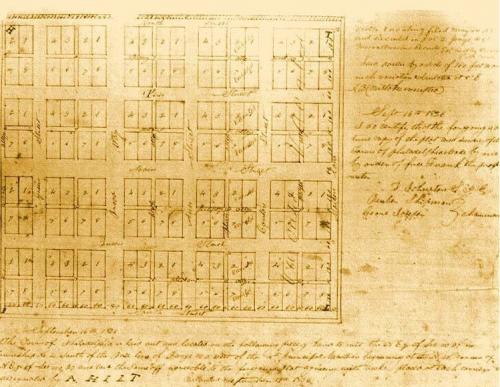 New Philadelphia, Illinois was one of the most famous of the antebellum all-black towns.  Founded by Free Frank McWorter (1777-1854), a former Kentucky slave who purchased his freedom with his own earnings, New Philadelphia, Illinois was the first U. S. town to be registered by an African American prior to the Civil War.  Now covered by prairie farm fields, New Philadelphia was located across the Mississippi River from Hannibal, Missouri amid a cluster of other black settlements and pro-abolitionist Illinois towns.

Frank McWorter was born a slave in South Carolina and at the age of 18 moved with his owner to Kentucky.  With labor in short supply in their new location, McWorter was hired out to a neighboring farm, allowing him to prove his potential as a conscientious worker.  When his master announced the plantation was again relocating, McWorter negotiated a deal to remain in Kentucky, running the farming operations, saving wages, and eventually opening a saltpeter mine as a side business.  He earned enough money to purchase his freedom along with that of another slave, his wife Lucy (1771-1870), for a total of $1,600.  McWorter later purchased the freedom of their first-born son as well as 15 other family members.  In 1830, he sold all of his Kentucky holdings and moved his family to northwest Illinois.

Under the 1832 Land Act, McWorter purchased 42 acres of land in Hadley Township within Pike County, Illinois.  He platted and legally registered the town which he called New Philadelphia.  Like other land promoters of that era, McWorter sold parcels to black and white pioneers.  With his right to own property as a free black in Illinois limited by state statutes, McWorter petitioned the Illinois General Assembly using a legislative loophole, and by 1836 he and his sons owned 600 acres in Hadley Township without restriction.

Located near several active waterways, New Philadelphia grew prosperous in the late antebellum period.  A proposed railroad to be built sometime in the 1860s boosted land speculation and by 1870, the population peaked at 200.  The railroad, however, was rerouted to a neighboring community, and the town soon suffered economic decline and was eventually abandoned.

The New Philadelphia town site is now farmland, but there is renewed interest in the town’s history as reflected in archaeological projects led by the University of Illinois, the Center for Heritage Resource Studies, and by Free Frank McWorter’s great-great-granddaughter, Juliet E. K. Walker.  In 2005, the town site was placed on the National Register of Historic Places.  Four years later, in 2009, it gained National Historic Landmark status.