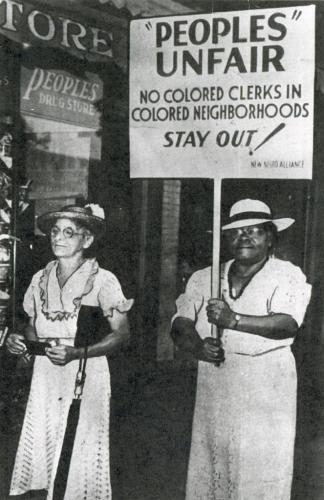 The New Negro Alliance (NNA) was a Washington, D.C. based organization founded in 1933 by mostly middle class blacks to use pickets, economic boycotts, and other direct action protests to promote civil rights. It sought to increase African American employment opportunities, especially in white collar positions and to challenge discriminatory employment practices. Although the NNA wasn’t the first organization in the city’s black community to use direct action protests to combat discrimination, it was the largest and most successful organization to that date to employ economic boycotts as its main tool for civil rights.

The NNA began in August 1933 when John Aubrey Davis, a twenty-one year old Williams College graduate boycotted the Hamburger Grill, a white-owned business in a black neighborhood which had fired its three black employees, replacing them with white workers. John Davis gathered a group of black men and organized a picket and boycott of the restaurant on August 28. Within two days the Hamburger Grill rehired the three fired black employees.

After the Hamburger Grill boycott, the New Negro Alliance was formed. With John Davis, Belford V. Lawson, Jr., and M. Franklin Thorne as its leaders, the New Negro Alliance launched campaigns such as “Don’t Buy Where You Can’t Work,” and “Jobs for Negroes.” Between December 1933 and 1937 the NNA published a weekly newspaper, New Negro Opinion, to help in its campaign for civil rights.

Led by attorney and NNA founder, Belford Lawson, the New Negro Alliance won a major legal victory in its lawsuit against the Sanitary Grocery Company which had challenged the organization’s right to organize a boycott against it. The Washington, D.C. area grocery chain had 255 retail outlets including many in black neighborhoods, but refused to hire African Americans in any capacity. The U.S. Supreme Court ruled in New Negro Alliance v. Sanitary Grocery Company, Inc. (1938) that “those having a direct or indirect interest in the matters of employment have the freedom to take action against discrimination and peacefully persuade others.” This win strengthened the NNA.

The organization however could not mount successful boycotts against People’s Drug Stores and the Safeway Grocery chain in 1940. Those defeats indicated that the local community was no longer willing to support boycotts as a civil rights tactic which meant the beginning of the NNA’s demise. Also in 1941 President Franklin D. Roosevelt issued Executive Order #8802 which set up the Fair Employment Practices Committee to investigate employment discrimination. Coupled with World War II labor demands, many of the most blatant patterns of employment discrimination in Washington ended.