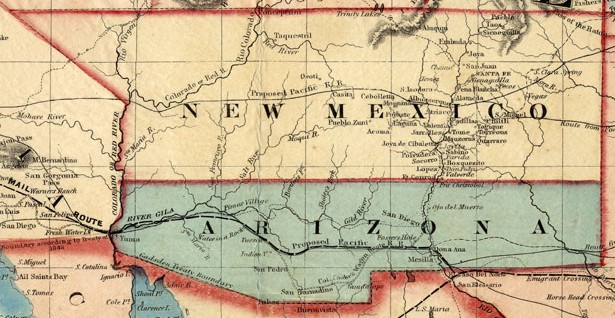 Slavery in New Mexico Territory was never focused on black bondage as in the Southern states. New Mexico Territory never had more than a dozen or so black slaves because it had other forms sources of coerced labor, both Native American indentured servants and slaves, and Mexican peons. The economy of antebellum New Mexico Territory was similar to the Old South with a small aristocracy of Spanish-speaking and English-speaking landowners holding vast estates. While all almost all slaves were Indians, indentured servants came from a variety of backgrounds as individuals would sell themselves or family members into lifetime servitude to pay off debts.

By the 1850s New Mexico had a thriving and growing economy that included extensive slave labor.  During that decade New Mexico slavers made a number of raids into Indian Territory which increased the number of enslaved Native Americans.  With the attention on Indian slaves, black bondage was not given much consideration. By the mid-1850s a number of fugitive black slaves from Texas arrived in the Territory.  The Territorial Legislature passed a law in 1856 which for the first time limited the number of free blacks coming into New Mexico in hopes of discouraging the fugitives’ flight there.  That law forced some New Mexico blacks to leave the Territory.

Then in 1859 the Territorial Legislature enacted New Mexico Territory’s first Slave Code.  The law restricted slave travel, prohibited slaves from testifying in court, and limited the owners’ right to arm slaves. This code was all implemented ironically to keep blacks out of New Mexico and preserve Native Americans as the major group of enslaved workers.

The Slave Code’s impact was short.  In 1862 the United States Congress outlawed slavery in all U.S. territories including New Mexico.  Three years later the Thirteenth Amendment to the U.S. Constitution abolished slavery and involuntary servitude through out the nation.  The inclusion of involuntary servitude was added specifically to eliminate New Mexico Territory’s long tradition of indentured servitude.