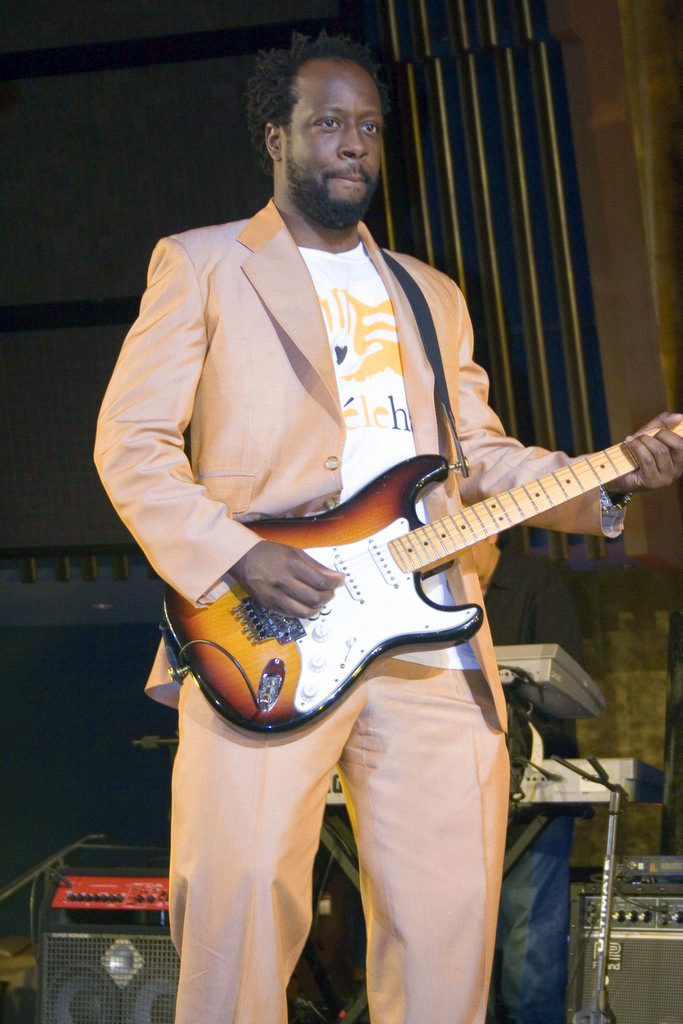 Nel Ust Wyclef Jean is an rapper, musician and actor. Jean was born on October 17, 1969, in a hut with no electricity, in Croix-des-Bouquest, Haiti. His parents, Nazarene Pastor Gesner and mother Yolanda immigrated to the United States, and in 1978, Jean and his three siblings came to the U.S, settling with their parents in Brooklyn, New York. The family relocated to New Jersey, and in 1987, Jean formed the group The Tranzlator Crew with cousin Prakazrel “Pras” Michel and Lauryn Hill. Jean graduated from Vailsburg High School in Newark, New Jersey in 1988, and briefly attended East Nazarene College in Quincy, Massachusetts, Five Town College in Dix Hills, New York, and later Berklee College of Music in Boston, Massachusetts.

The Tranzlator Crew signed a record deal with Ruffhouse Records in 1993 and changed their name to The Fugees, an abbreviation of refugees. The Fugees released two albums and parted ways in 1996 to focus on solo careers. Jean released his first solo album Wyclef Jean Presents the Carnival Featuring the Refugee All-Stars (The Carnival) (1997) featuring Jean’s siblings Blandinna Melky Jean and Farel Sedeck Guerschom Jean, who form the group Melky Sedeck. In 1998, Jean won the MTV Video Music Award in the categories Best R&B Video and Best Direction in a Video, for the single “Gone Till November,” featuring musician Bob Dylan.

His second album, The Ecleftic:2 Sides II a Book, was released in 2000, and Jean made his film debut in the 2001 MTV made for tv drama musical, “Carmen: A Hip Opera,” starring Beyonce Knowles and Mekhi Phifer and directed by Robert Townsend. He then released his third album, Masquerade (2002), and his compilation album Greatest Hits (2003). His fourth album, The Preacher’s Son (2003), was largely in the Haitian Creole language, and his fifth album Welcome to Haiti: Creole 101 (2004), features songs in English, French, Creole, and Latin. He briefly united with The Fugees in 2004 for the Dave Chappelle block party documentary, and was appointed Ambassador-at-large for Haiti in 2006 by then Haitian President Rene Preval.

Jean’s sixth studio album, Carnival Vol II: Memoirs of an Immigrant (2007) was released as a sequel to  his first album, and his seventh album, From the Hut, to the Projects, to the Mansion (2009) tells the story of fictional character Toussaint St. Jean, based on the 18th century Haitian revolutionary Toussaint L’Overture. His ninth album, If I Were President: My Haitian Experience (2010) was released the same year Jean announced his candidacy for the Presidency of Haiti. Jean however was unable to circumvent the five consecutive years of residency requirement. He then released the mixtape, J’Overt (2017). In 2017 he released Carnival III: The Rise and Fall of a Refugee and two years later Wyclef Goes Back To School.

Jean has written songs for the films, Hotel Rwanda and The Manchurian Candidate, soundtracks for the documentaries including The Argonomist, and the Angelina Jolie documentary A Place In Time, and has co-written music for Whitney Houston. Jean established the charitable organization, Yele Haiti, known legally as the Wyclef Jean Foundation in 2001 which donated over nine million dollars towards the education of the children of Haiti. In 1994, Jean married fashion designer Marie Claudinette, and in 2005 the couple adopted daughter Angelina Claudinelle Jean. Jean published his memoir Purpose: An Immigrant’s Story (2012), depicting his childhood as so poor, he ate dirt from the floor of his family hut.