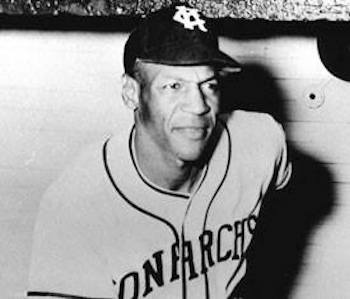 John Jordan “Buck” O’Neil was born November 13, 1911, in Carrabelle, Florida.  Working with his father on a Florida celery farm when he was 13, the young O’Neil said to himself “Damn. There’s got to be something better than this.” After traveling to West Palm Beach to see Rube Foster’s baseball team at the Royal Poinciana Hotel, O’Neil decided baseball was going to be his way out.

O’Neil’s professional career began in 1937 with a short stint with the Memphis Red Sox. Later that season O’Neil would sign with the Kansas City Monarchs, where he would spend the rest of his playing career. In 1942 O’Neil led the Monarchs in a four-game sweep of the Homestead Grays in the league championship, batting with a .353 average. In two different seasons, 1940 and 1946, O’Neil won the league batting title, hitting .345 and .350.

In 1948 O’Neil replaced Frank Duncan as manager of the Kansas City Monarchs. As a manager and scout, O’Neil sent more African Americans to the Major Leagues in his career than any other individual, including future Hall-of-Famers like Ernie Banks and Lou Brock. O’Neil was renowned for his knowledge of the game, but also for his leadership of younger players, and he never lost a contest when selected to manage a team in the All-Star games of 1950, 1953, 1954, and 1955.

The only break in O’Neil’s baseball career came with a two year tour with the United States Navy from 1944 to 1945. In 1956, O’Neil was hired as a scout by the Chicago Cubs, and in 1962 the Cubs made him the first African American manager of a major league team.

O’Neil was instrumental in organizing the Negro Leagues Baseball Museum in Kansas City, Missouri, and until his death served as an ambassador for the Negro Leagues to gain recognition in American history. Recently denied entry into the National Baseball Hall of Fame in Cooperstown, New York, the Kansas City legend asked his fans to “shed no tears for Old Buck.”

Buck O’Neil died on October 6, 2006. On December 15, 2006, O’Neil was posthumously awarded the Presidential Medal of Freedom at the White House in Washington, D.C., the highest honor awarded to civilians by the United States government.