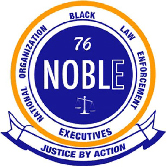 Founded in September of 1976 during a three-day symposium, The National Organization of Black Law Enforcement Executives (NOBLE), was created to tackle crime in low-income urban areas. Committed to justice and action, NOBLE serves to ensure equity in justice for all communities during citizens interactions with law enforcement. NOBLE’s national headquarters is located in Alexandria, Virginia, but is represented by 59 chapters across the United States a well as parts of the Caribbean, Canada, the United Kingdom, and some countries in Africa.

The initial symposium was organized by the Joint Center for Political Studies and co-sponsored by the Law Enforcement Assistance Administration (LEAA) and the Police Foundation. The symposium, held in Washington D.C., brought together 60 of the top ranking black law enforcement executives who represented 24 states and 50 major cities. The discussion focused on equality in the administration of justice as well as police relationships with the community, and presence and promotion of black police officers. The symposium also highlighted socioeconomic conditions as a reason for high crime rates in black urban communities and sought ways to address these underlying issues as well as improve training to ensure the equitable administration of justice.

The symposium also discussed the ways in which black law enforcement executives can act as a more unified voice to impact the national criminal justice system. Newark, New Jersey Police Chief Hubert Williams, the first African American to lead a department of a major city, was a primary organizer of NOBLE along with Bishop Robinson, Charles Gittens, Frank Ingram, and Gwynne Peirson, among others. All were founding members of NOBLE.

NOBLE also works to ensure that officers do no mistreat citizens regardless of their neighborhood or socioeconomic status. Its goal is to have police officers treat all citizens with respect. NOBLE also has programs that address the changing needs of African Americans including access to help with domestic violence, drug addiction, mental health issues, and child safety awareness for families. NOBLE also provides mentoring programs for young people who want to go into law enforcement and classes for youth 13-18 to learn the best ways to interact with law enforcement.

NOBLE continues to strive for improvements in the criminal justice system. In 2015, the organization worked with StreetCred Software, Inc. to develop a software that reports on the number of unarmed civilians killed after being confronted by the police. The hopes with this project and other projects organized by NOBLE will create more awareness among the public and police officers themselves about the circumstances around these shootings which in turn will reduce tension and mistrust and ensure fair treatment between police officers and the citizens they are sworn to protect.