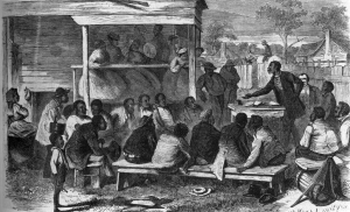 Founded in Syracuse, New York in 1864, the National Equal Rights League (NERL) promoted full and immediate citizenship for African Americans. Created during the Civil War, the League based its call for full citizenship as compensation for military service in the Revolutionary and Civil Wars. They argued that the sacrifices of African Americans on the battlefield entitled all black males to the ballot and all black men and women to full citizenship.

The founders of the NERL included Henry Highland Garnet, Frederick Douglass, and John Mercer Langston, among other prominent leaders. Although it began in New York, it quickly spread throughout the country immediately after the Civil War.  Active local branches grew in Louisiana, Michigan, Pennsylvania, Massachusetts, Ohio, Missouri, and especially North Carolina.

The NERL quickly became associated with Republican politics at the local and national level.  Although African American men were little more than 2% of the Northern population in 1870, they nonetheless worked toward full civil rights.  In 1866, for example, the Pennsylvania League successfully brought lawsuits to end streetcar segregation.  Their success led to similar NERL-inspired legal action in other Northern states.

The League also recognized the importance of education in guaranteeing equal rights.  At the first annual meeting of the NERL in 1865 in Cleveland, Ohio, League leaders called for integrated education but they were careful to note that such integration should not result in discrimination against African American teachers. NERL found little support for school integration even during the Reconstruction period in the South or the North. The Pennsylvania League, for example, petitioned that state’s legislature annually and unsuccessfully from 1876 to 1880 to integrate schools.

By the beginning of the 20th Century, the League nearly disintegrated but in 1908 William Monroe Trotter revived interest by promoting NERL as an important vehicle for pursuing equal rights through the courts, arguing that these institutions were more sympathetic to black rights than federal or state governments.

During the first decade of the 20th Century, W.E. B. DuBois, now a prominent leader of the League, attempted unsuccessfully to convince NERL members to include white Americans in the organization.  When he failed, he joined the newly organized National Association for the Advancement of Colored People (NAACP).

The League also debated women’s suffrage. Octavius Catto, Robert Purvis, and Elisha Weaver all favored women’s political equality.  The majority of League members, however, feared that pressing for women’s suffrage would weaken the campaign to restore black male voting rights in the South. While women were members of the League’s auxiliaries from its early years, it was only in the first decade of the 20th century that NERL moved toward advocating gender as well as racial equality.  Fifty years after its founding, Ida B. Wells, journalist and anti-lynching activist, became vice president of the League. Wells, a founding member of the NAACP, left that organization for the NERL.

During World War I, the League called on the U.S. Congress to make lynching a federal crime.  By 1919, the NERL pushed to add to Woodrow Wilson’s “Fourteen Points,” a “fifteenth point” which called for the worldwide elimination of “civil, political, and judicial distinctions based on race and color.” However, as the NAACP grew in prominence, support for NERL declined. By 1921, most League members had joined the NAACP.