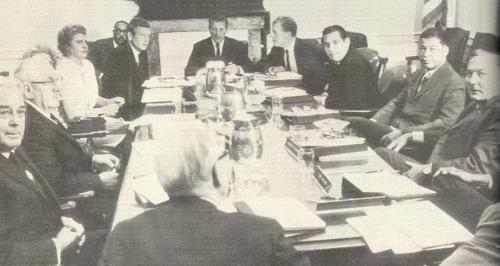 The National Advisory Commission on Civil Disorders was organized by President Lyndon B. Johnson on July 28, 1967 to investigate the urban rebellions erupting in cities across the nation between 1964 and 1967. The findings of the seven-month study were published in March of 1968.  The eleven-member commission, more commonly known as the Kerner Commission, after its chairman, Governor Otto Kerner of Illinois, concluded that the United States was “moving toward two societies, one black, one white—separate and unequal.”

President Johnson charged the commission with answering three questions: What happened? Why did it happen? What can be done to prevent racial disturbance in the future? In order to answer these questions, the Commission surveyed twenty-three cities across the nation which experienced a racial rebellion. They found that the racial disturbances were not the result of a single triggering event, but that in all cities surveyed, African Americans experienced severe economic and social disadvantages compared to whites. Also, the report noted that the riots were not the result of any conspiracy; rather they were a response to what the report identified as the racial attitudes and behaviors of white Americans toward African Americans.

In responding to why the rebellions occurred, the Kerner Report pointed to black American’s frustration and feelings of powerlessness regarding extremely high rates of unemployment and underemployment, poverty, police brutality, and inadequate public services. The Report continued that a largely poor black population was confined to the central cities while a predominantly white population moved out, and that the racism of white Americans was “essentially responsible for the explosive mixture,” leading to the uprisings.

Answering what can be done to prevent this in the future, the Commission suggested that the Federal government intervene to improve housing, education, employment opportunities and social services for African Americans. Also, to dismantle discriminatory practices in education, employment, the police force and criminal court systems. President Johnson accepted the report, but did not support the conclusions, and minimal efforts were made to address the problems identified by the Commission.