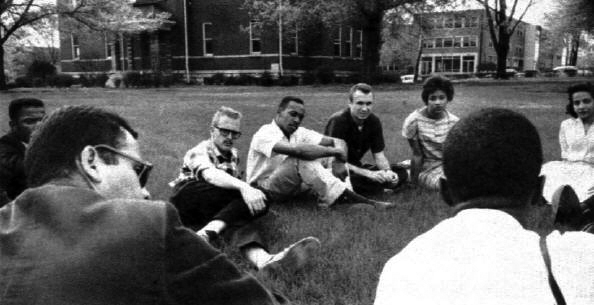 The NSM’s main goal was to use nonviolence to challenge segregation in Nashville’s public accommodations. Diane Nash and Marion Barry who participated in the workshops were Fisk University students at the time. John Lewis, Bernard Lafayette, and James Bevel attended American Baptist Theological Seminary. These workshops prepared the students for the verbal and physical abuse they would experience from white segregationists when they attempted to engage in protests and demonstrations.

On February 13, 1960, NSM organized more than 100 students for what many would remember as the beginning of the Nashville Sit-In Movement. Their main target was the Kress, McClellan, and Woolworth’s lunch counters that day. The students sat at lunch counters in those stores and demanded service. They were denied that service on February 13.

The NSM would continue the lunch counter protests which soon expanded to other lunch counters included Grants, Walgreens, Greyhound, and Trailways. On May 10, 1960 after negotiations that included Nashville Mayor Raphael Benjamin West, lunch counters in the city were desegregated. As a result of their success, the NSM would be recognized as the largest, best-organized, and most disciplined student sit-in groups in the south.

After the Nashville Sit-Ins, the NSM would continue at their attempt to desegregate other public accommodations including Nashville grocery stores such as H.G. Hill. In February 1961, NSM was involved with stand-in protests at Nashville movie theaters including the Paramount, Tennessee, Loew’s, and Crescent theaters. These theaters would be desegregated by April 29, 1961.