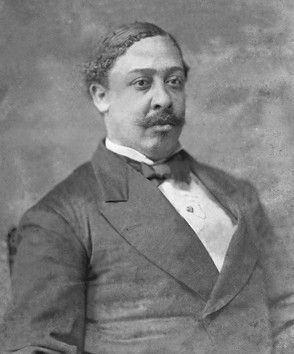 Republican Charles Edmund Nash served in the 44th Congress as Louisiana’s only black representative. Nash was born in Opelousas, St. Landry Parish, Louisiana, on May 23, 1844. Before his time in Congress, Nash attended common schools, was a bricklayer in New Orleans, and had enlisted as a private for the U.S. Volunteers in July of 1863. He was later promoted to Sergeant Major, but his military service proved to be disastrous as he lost the lower third of his right leg just before the Civil War’s end.

As a result of his military service and strong support of the Republican Party, he was appointed to the position of night inspector in the New Orleans Customs House–a powerful post in the local political machine. In 1874 he was elected, uncontested, to the House of Representatives from the 6th Congressional District.

Despite his easy election, Nash made little political impact during his time in Congress.  He was assigned to the Committee on Education and Labor.  On June 7, 1876, Nash made the only major address during his term as Congressman.  His speech condemned the violent and anti-democratic actions of some Southern Democrats, called for greater education among the populace, and appealed for increased racial and political peace, especially in the South.

Partly a result of internal divisions within the Louisiana Republican Party, Nash lost his bid for reelection to Democratic challenger Edward Robertson by over 5,000 votes.  Nash never again held elective office.  He returned briefly to the bricklayer’s trade and was later a postmaster in St. Landry parish until 1882. He also  worked as a cigar maker. Charles Edmund Nash died in New Orleans on June 21, 1913.