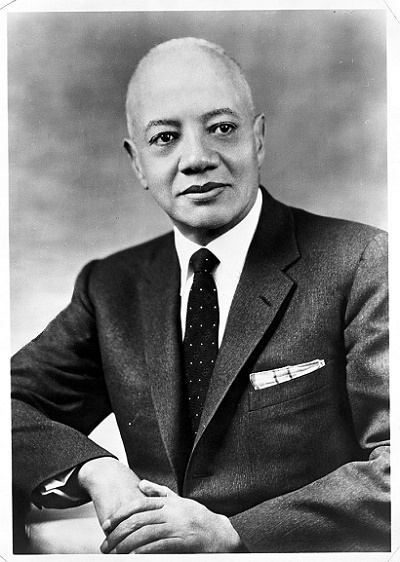 James Madison Nabrit, Jr. was a renowned civil rights lawyer, Howard University president, and United Nations deputy ambassador.  During his legal career, he argued for the voting rights of blacks as well as school desegregation.

Nabrit was born September 7, 1900, in Atlanta, Georgia.  The son of a Baptist minister, he attended Morehouse College, graduating in 1923. Nabrit continued his studies and received a doctorate in law from Northwestern University in 1927.

He worked as an attorney in Houston, Texas, beginning in 1930, and for the next six years developed a successful law career.  In 1936 Nabrit moved to Washington, D.C., where he became a member of Howard University’s law school faculty and established the first civil rights course for a U.S. law school.  From his post at Howard, Nabrit continued to teach while working on a number of significant civil rights cases.

Among those cases were Lane v. Wilson, (1939), concerning the registration of black voters in Oklahoma, and Terry v. Adams (1953), which focused on the right of African Americans to participate in primary elections in Texas. He argued successfully for both cases.  Nabrit worked closely with prominent civil rights lawyers Charles Hamilton Houston, Thurgood Marshall, and other members of the NAACP Legal Defense Fund throughout his career.

In 1958 Nabrit became dean of the Howard University Law School and two years later was appointed president of the university. In 1966 President Lyndon B. Johnson appointed him U.S. Deputy Ambassador to the United Nations.

Nabrit returned to the university in 1967 amid student protests.  Tensions ran high on campus when five faculty members and 18 students were dismissed for disruptive demonstrations.  Nabrit, who was criticized by many students and alumni for his actions, resigned as president in 1969.