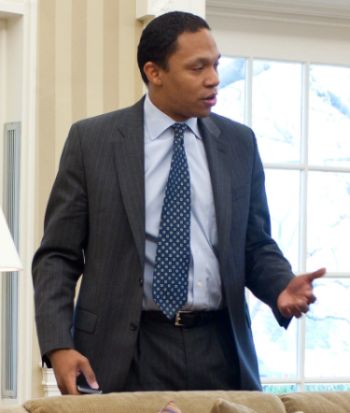 Rob Nabors was the Deputy Chief of Staff to U.S. President Barack Obama. Previously, Nabors served as the Director of Legislative Affairs in the Obama Administration, as Deputy Director of the Office of Management and Budget, and as Senior Advisor to former Chief of Staff Rahm Emanuel.

Nabors is the son of Army Major General Robert L. Nabors, and his wife. He was born in Fort Dix, New Jersey. Since his father was active in the military, Nabors lived in a variety of places during his youth, including Arizona, Maryland, Germany, Virginia, South Korea, Florida, Italy, and Massachusetts. He received a B.A. from the University of Notre Dame in 1993 and an M.A. from the University of North Carolina-Chapel Hill in 1996. Immediately after graduating from North Carolina-Chapel Hill, Nabors joined the Office of Management and Budget as a program examiner. Assigned to the Bureau’s commerce branch, he was responsible for the decennial census, and while he was working on that task was praised by OMB Director Jacob Lew, who promoted him to special assistant to the director in 1998.  He was 27 at the time.

In 2000 Nabors was promoted to assistant director for administration and executive secretary where his basic tasks were to provide high-level administrative support by conducting research, handling information requests, preparing statistical reports, and performing clerical functions such as receiving visitors, preparing correspondence, scheduling meetings, and arranging conference calls. In 2001 he was a staffer for the House Appropriations Committee.  He was promoted to minority staff director of the Committee by Appropriations Chair, Congressman David Obey (Wisconsin) in 2004 and, upon the Democrats winning the House in 2006, was made the majority staff director. Nabors served on the House Appropriations Committee until 2008 and during that time became the 13th Clerk and Staff Director of the Committee.

On November 25, 2008 Nabors was selected by President-elect Barack Obama as Deputy Director of the Office of Management and Budget (OMB). As the Deputy Director of the OMB, the largest office within the Executive Branch, Nabors assisted the President in preparing the budget and measuring the quality of agency programs, policies, and procedures and to see if they complied with the President’s policies.

In February 2010 Nabors became senior advisor to then-White House Chief of Staff, Rahm Emanuel. Jeff Liebman replaced Nabors as Acting Deputy Director. In January 2011 Nabors succeeded Phil Schiliro as the head of the White House Office of Legislative Affairs. Later that year Nabors was included on The New Republic‘s list of Washington’s most powerful, least famous people, whose purpose was to document those in D.C. who quietly wield power.

Most recently, Nabors was assigned by the White House to investigate the Veterans Administration scandal involving the treatment of former soldiers, sailors, marines, and airmen.  His responsibility includes making recommendations on reforms at one of the largest agencies in the federal government.