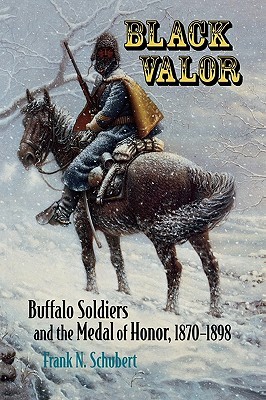 Nineteenth Century African American soldiers who served in the Western United States have generally been known a “Buffalo Soldiers.”  In this article, however, military historian Frank N. Schubert, challenges modern popular perceptions of the soldiers, among them the significance of their name and the nature of their views of the native  people against whom they fought.   His argument appears below.

On and off for about forty years, I have been writing about the men and families of the black regiments that served in the U.S. Army between the Civil War and World War I.  I found their history intriguing and important because they were pioneers in post-slavery America, the first black soldiers allowed to serve in the regular Army, staking their claims on citizenship by serving their country and doing so within a pervasively racist context that limited their occupational mobility, caused humiliation, and sometimes put them at personal risk.

While historians explored their contributions and lives, myths and misconceptions emerged and gained acceptance, covering a range of topics from the origin and significance of their widely recognized nickname—-“Buffalo Soldiers”–to the supposed empathy they shared with their Indian foes.  Myths and misconceptions also include the widely held belief that their combat record far surpassed that of white units (it did not), and the view that their equipment, uniforms, and mounts were worse than those issued to other units (they were not).  And, most extraordinarily, in light of the ongoing flood of literature and memorabilia concerning their lives and service, the notion persists that theirs is an untold story or hidden history, slighted and kept from public knowledge.

Elements of the buffalo-soldier myth started to appear coincident with wider knowledge of the black regiments.  William Leckie’s 1967 book, The Buffalo Soldiers, essentially a campaign history of the 9th and 10th Cavalry regiments, brought the service of these units to popular attention and popularized the term “buffalo soldiers.”  Leckie suggested that the Indians gave the name to the black soldiers of the 10th Cavalry because they saw some resemblance between the buffalo and these brown-skinned men, some of whom had woolly looking hair and who sometimes wore buffalo hide coats in the winter.  He went from there to assert that the name might have reflected the Indians’ respect for the soldiers because the buffalo was so important to their culture and they would not have made the comparison if it had not been respectful.  In a footnote, Leckie hedged his suppositions:  “The origin of the term ‘buffalo soldier’ is uncertain, although the common explanation is that the Indian saw a similarity between the hair of the Negro soldier and that of the buffalo.  The buffalo was a sacred animal to the Indian, and it is unlikely that he would so name an enemy if respect were lacking.  It is a fair guess that the Negro trooper understood this and thus his willingness to accept the title.”

Over the years since Leckie offered this cautious explanation, we have moved to the point where many people regard the nickname “buffalo soldiers” as honorific, showing that the Indians considered the black troopers to be exceptional, perhaps the best soldiers that the army had.  In the course of forty years, Leckie’s cautious guesses evolved into the hyperbolic text on the Wal-Mart website.  The giant retailer offered a Black History Month study guide in 2005, which declared that “Their name–Buffalo Soldiers–was bestowed on them by the Cheyenne people.  It refers to their fierce fighting abilities along with the woolly texture of their hair.”  Yet the fact remains that we lack proof that the name meant anything more than identification between brown skin and nappy hair on one side and brown fur on the other and no evidence has turned up that the soldiers themselves used the name to refer to themselves, not in black newspapers, not in pension files, not in letters, not anywhere.  The 10th Cavalry’s crest prominently displayed a bison, but it was designed and adopted in 1911, so while it may reflect some memory of the name dating from the regiment’s early days, it does not necessarily indicate acceptance of the name by black soldiers of the Indian-war period.

The alleged bestowal of this name “Buffalo Soldiers” as a sign of respect by Indian warriors has not gone unchallenged.  The most serious objection has come from contemporary Native American leaders, who were angered over the publicity attending the issue of a buffalo-soldier postage stamp in 1994 and resented the suggestion that there was some special bond between the soldiers and their warrior ancestors.  The first salvo of dissent came from Vernon Bellecourt of the American Indian Movement.  Writing in the weekly Indian Country Today, a reliable forum for objections to glorification of Buffalo Soldiers, Bellecourt denied that the name reflected any “endearment or respect.”  As far as he was concerned, Plains Indians only applied the term Buffalo Soldier to “these marauding murderous cavalry units” because of “their dark skin and texture of their hair.”

On the other side, it is worth noting, black soldiers writing in pension requests and veterans’ newspapers showed no signs of a special regard for the Indians.  They used the same dismissive epithets–”hostile tribes,” “naked savages,” and “redskins”—and the same racist caricatures employed by whites.  Reminiscent of the use among whites of “blackface” to denigrate and stereotype African-Americans, a black private named Robinson went to a masquerade ball at Fort Bayard, New Mexico, in 1894, dressed as “an idiotic Indian squaw,” according to a published report by a fellow soldier.

By the same token, it should not be too surprising to read of a black soldier calling a Plains Indian in 1890 “a voodoo nigger,” repeating the voice of a white soldier who called the Plains Indians in 1873 “red niggers.”  This buffalo soldier only reflected the overall values of the culture in which he struggled for a place, hoping to ally himself with the dominant group.  As historian William Gwaltney, a descendent of buffalo soldiers, said, “Buffalo Soldiers fought for recognition as citizens in a racist country and…American Indian people fought to hold on to their traditions, their land, and their lives.”  These were not compatible, harmonious goals that could provide the basis for interracial harmony.

The idea that the buffalo-soldier combat record surpassed that of other units helps support the notion that the Indians might have been especially respectful of the black soldiers.  However, it fails to withstand analysis.  These soldiers did participate in significant battles.  They fought in major wars against Indians, including conflicts against the Cheyenne in Kansas after the Civil War, the decade-long and brutal Apache war of the late 1870s and early 1880s, and the last major campaign on the Pine Ridge in South Dakota during 1890-1891.  Depending on which of three overlapping listings of combat engagements you choose, in the years between 1866 and 1897 they fought in between 135 and 163 of 939 to 1,282 battles and skirmishes.  A consolidated count, incorporating all the engagements mentioned at least once in the three lists yields 168 encounters in which black soldiers participated, out of a total of 1,296, or 13 percent of all engagements, just about proportional to their numerical presence in the Army.  This was enough to show their active participation in more than thirty years of bloody and occasionally severe combat but does not support claims that they bore the brunt of frontier warfare.

The claim that the Army treated these regiments as a scrap heap for discarded and useless materiel and horses was shown to be false by William Dobak and Thomas Phillips in their book The Black Regulars.  All Army units, white as well as black, received left-over Civil War equipment and mounts, from a Department of War that focused on cutting costs and reducing manpower.

That leaves the myth of the untold story.  On the scholarly side this myth found expression as recently as 1999 in historian Charles Kenner’s assertion that the Buffalo Soldiers’ “lives and deeds have largely been overlooked.”  Only the year before, Bruce Glasrud’s bibliography on African Americans in the West contained over twenty-four pages and more than 300 entries devoted to the black regiments.  On the popular level, General Colin Powell’s highly publicized dedication of the buffalo soldier statue at Fort Leavenworth, Kansas, in the summer of 1992, made the buffalo soldier into a well-known, widely familiar cultural icon, adorning tee shirts, refrigerator magnets, phone cards, jigsaw puzzles, and coffee mugs.   Buffalo soldiers also became the subjects of western novels, bodice rippers, children’s books, plays, movies, and popular songs.  By the turn of the 21st century, there were also statues of black frontier-era soldiers at five western posts, most recently one dedicated at Francis E. Warren Air Force Base, in 2007, with two more soon to come.  These are not manifestations of an untold story, but of one that is embedded in the popular culture.

The explanation for the myth must be sought in the period of its emergence, rather than in the history.  Why, in the absence of data, or even despite the contrary evidence, has the myth taken hold?  What needs does it meet?   How much of the myth is a multi-cultural fantasy, an attempt to see the past through a present-day prism?  Is it patronizing to give these soldiers more credit than they deserve?  Why is a story that has been told repeatedly from multiple perspectives over the last two generations widely labeled “untold”?  The myth raises many questions that still await answers.

For more about the buffalo soldiers, their service and their lives, see
William H. Leckie, The Buffalo Soldiers:  A Narrative of the Negro
Cavalry in the West
(Norman:  University of Oklahoma Press, 1967);
Frank N. Schubert, Voices of the Buffalo Soldier:  Records, Reports,
and Recollections of Military Life and Service in the West
(Albuquerque:  University of New Mexico Press, 2003); Frank N.
Schubert, Black Valor:  Buffalo Soldiers and the Medal of Honor,
1870-1898 (Wilmington, DE:  Scholarly Resources, 1997); and William A.
Dobak and Thomas D. Phillips, The Black Regulars, 1866-1898 (Norman:
University of Oklahoma Press, 2001).