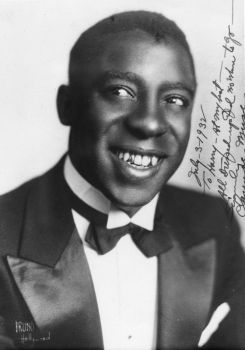 On October 14, 1889, Clarence Edouard Muse was born to Alexander and Mary Muse in Baltimore, Maryland.  Muse had intended to become an attorney and earned a degree in International Law from The Dickerson School of Law in Pennsylvania in 1911.  Because of poor opportunities for African Americans in the legal profession, however, Muse became a performer.

Clarence Muse toured the vaudeville circuit, composed songs, directed both theater and film, entertained as a minstrel performer, sang opera, wrote screenplays, and appeared in over 150 films.  In 1914, Muse helped pioneer the black theater movement by co-founding the all-black theater troupe, the Lafayette Theater Stock Company.  He frequently appeared with the Lincoln Players, another famous troupe from the “Harlem Renaissance.”

Throughout his eclectic career, Muse was an outspoken advocate for improved treatment of black actors and other performers.  Whether it was his strategy or not, one of his greatest successes was in helping break down many of the barriers that stood in the way of black performers.  Some of his career highlights include performing in “Hearts in Dixie,” the first all-black film (1929); co-authoring the script and songs for “Way Down South” with Langston Hughes in 1939; playing Sam the pianist in the weekly TV version of Casablanca in 1955; and co-starring in the film version of Porgy and Bess with Sidney Poitier, Dorothy Dandridge, and Sammy Davis Jr.  Muse’s later film credits included Buck and the Preacher in 1972 and Car Wash in 1976

In 1973, Muse was inducted into the Black Filmmakers Hall of Fame.  Muse died on October 13, 1979, four days before the release of his final film, The Black Stallion.  Throughout his career, Clarence Muse was both a talented and inspiring performer and a crucial force in the movement toward equality for African Americans in the performing arts.