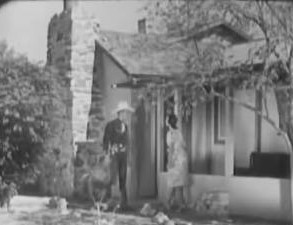 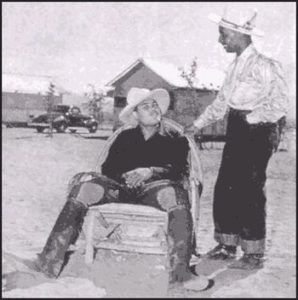 Murray’s Ranch, a guest ranch in Apple Valley, California, was unique in that it was owned by and catered primarily to African Americans, and because it served as the set for a number of “all-black cast” western films. The 40-acre ranch on the edge of the Mojave Desert was purchased by Nolie B. and Lela Murray in 1922 for $100.

Nolie, a black businessman from Los Angeles, and his wife, Lela, decided to convert the former working cattle ranch at the intersection of Waalew and Bell Mountain Roads in the northern part of Los Angeles County into the nation’s first black-owned dude ranch. Their ranch soon became a favorite vacation spot for African Americans since widespread segregation practices in the first half of the 20th Century limited black Californians’ access to private and public recreational facilities.

By the late 1930s a number of films were shot on location at Murray’s Dude Ranch including four of Herbert Jeffries’ “all-black cast” westerns. Jeffries, known as the singing cowboy, was the star of “Harlem on the Prairie” (1937), “Two-Gun Man from Harlem” (1938), “The Bronze Buckaroo” (1939), and “Harlem Rides the Range” (1939).  Aside from Joe Louis, who returned to the ranch on several occasions, and Herb Jeffries, who made films there, other celebrity guests included Bill “Bojangles” Robinson, Hattie McDaniel, Nina Mae McKinney, and Lena Horne.

Lela Murray died in 1949 at the age of 58.  In 1955, widower Nolie Murray married Callie Armstrong, a Los Angeles schoolteacher.  Soon afterwards the couple sold most of the ranch to singer and actress Pearl Bailey and her husband Louis Bellson for $65,000.  The Murrays kept five acres and built and managed a motel until Nolie’s death in 1958 at the age of 70.

Bailey and her husband used the ranch as their private resort where she could escape the demands of her career in the film and entertainment industry. They got involved in local political life until 1960 when Bailey and Bellson sold the ranch.
The new owners chose to use the property for other purposes and by 1988 the ranch had been abandoned for several years. Los Angeles County claimed the property and turned it over to the Apple Valley Fire Department which used the remaining buildings for training. By 1990 all of the ranch buildings were gone.