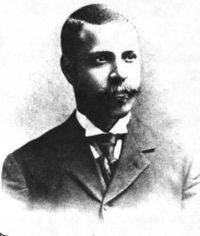 Daniel A. P. Murray was born on March 3, 1852 in Baltimore, Maryland.  At the age of nine he left Baltimore to live in Washington, D.C., where his brother managed the U.S. Senate restaurant.  In 1871 Murray acquired a job as a personal assistant to the librarian of Congress, Ainsworth R. Spofford.  Under Spofford’s tutelage Murray gathered invaluable research skills and learned several languages. In 1879 he married Anna Evans, an Oberlin College graduate whose uncle and cousin had taken part in John Brown’s raid on Harpers Ferry.  Two years later, in 1881, he advanced to assistant librarian of the Library of Congress, a position he would hold until his retirement in 1923.

Murray’s first major project as assistant librarian was a special display on “Negro Literature” for the American Exhibit at the 1900 Paris Exposition.  For this exhibit, and for future preservation at the Library of Congress, Murray searched for the title of every book or pamphlet known to be written by a person of African ancestry.  After securing a list of 270 titles Murray appealed to others for help in the search.  The response yielded 1,100 titles, 500 of which became the “Negro Literature” display at the Paris Exposition.  Murray continued his pursuit for the works of black authors long after the end of this exposition.  By 1907 he had accumulated a list of more than 12,000 books and pamphlets by black authors.  He had also collected a personal library of 1,488 volumes, which he eventually donated to the Library of Congress to become the “Colored Author Collection.”

As he continued to accumulate titles, Murray began to research the author’s personal lives as well.  His compilation became “Bibliographia-Africana” and was intended to include all known literature by writers of African ancestry, including biographical information about them.  Eventually he accumulated almost 500 biographical portraits of black historical figures.  Although his book was never published, much of his research was published over time in the popular magazine Voice of the Negro. Because of his vast knowledge on the topic of Negro literature, Murray was often called upon for information, and gave lectures before historical literary societies.  Occasionally he gave testimony before the U.S. Congress.

Besides being a great librarian and historian, Daniel A.P. Murray was also a civil rights activist and an advocate for rigorous education of African American youth.  He often stated that his research was designed to dispel notions of racial inferiority by illustrating that race was not an impediment to intellectual accomplishment.  Murray also testified before Congress against the numerous segregation laws that were being proposed during the time.  Murray’s principal accomplishment was his pioneering role in the black history movement.  Daniel Murray died of natural causes at his home in Washington, D.C. on December 31, 1925.  He was buried in Woodlawn Cemetery, Washington.  Murray was survived by his widow Anna and their seven children.