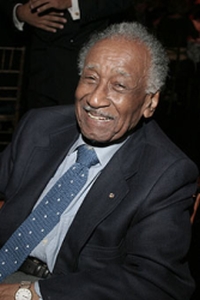 Albert Murray, an African American novelist, jazz critic, professor, and essayist, was born in Nokomis, Alabama on May 12, 1916.   His birth parents were Sudie Graham and John Young but he was adopted by Hugh and Mattie Murray and grew up in Magazine Point, Alabama.

Murray received his undergraduate degree from Tuskegee Institute in Alabama in 1939 on a scholarship from the Mobile County Training School and afterwards began taking graduate courses in Education at the University of Michigan.

In 1940, Murray began teaching as a part-time instructor for a freshman English class at Tuskegee, which was followed by a position as principal at a high school in southwest Georgia.  The next year, 1941, he married Mozelle Menefee, who graduated from Tuskegee in 1943.   In 1943, Murray entered the United States Army Air Corps and while there earned his Master’s degree in English at New York University in 1948.  He taught at various base locations in the United States and abroad before retiring from the U.S. Air Force as a major in 1962.  Upon his retirement he began his writing career.

In 1970, Murray wrote his first book, The Omni-Americans, which is a collection of literature reviews, essays, and commentaries, many of which he had written over the 1960s, discussing race in America.  The theme of his first book extends into his second work, South to a Very Old Place, which was published in 1971.  Here he recalled his childhood in segregated Alabama in the 1920s.  In 1972, Murray was invited to give a series of lectures at the Paul Anthony Brick Lectures on Ethics at the University of Missouri.  Those lectures were then published as The Hero and the Blues in 1973.   His 1974 novel Train Whistle Guitar won the Lillian Smith Award for Southern Fiction and the Alabama Library Association award, and was his first novel to explore the blues idiom; Murray’s main character was an improvising jazz soloist.

Other works by Murray include Stomping the Blue, a novel which appeared in 1976, Good Morning, Blues: The Autobiography of Count Basie which was a collaboration with Count Basie released in 1985, the 1991 novel The Spyglass Tree, collections of essays in The Blue Devils of Nada (1996), and Trading Twelves: The Selected Letters of Ralph Ellison and Albert Murray which appeared in 2000.  Stomping the Blues won the Deems Taylor Award given by the American Society of Composers, Authors, and Publishers in 1977.  In 1997 the Book Critics Circle gave Murray its lifetime achievement award.  The following year he received the inaugural Harper Lee Award as Alabama’s most distinguished writer.

Murray’s Trading Twelves: The Selected Letters of Ralph Ellison and Albert Murray, which he edited with John F. Callahan, appeared in 2000.  That same year he appeared as a commentator in Ken Burns’s multipart PBS documentary, Jazz. His last novel, The Magic Keys, was published in 2005.