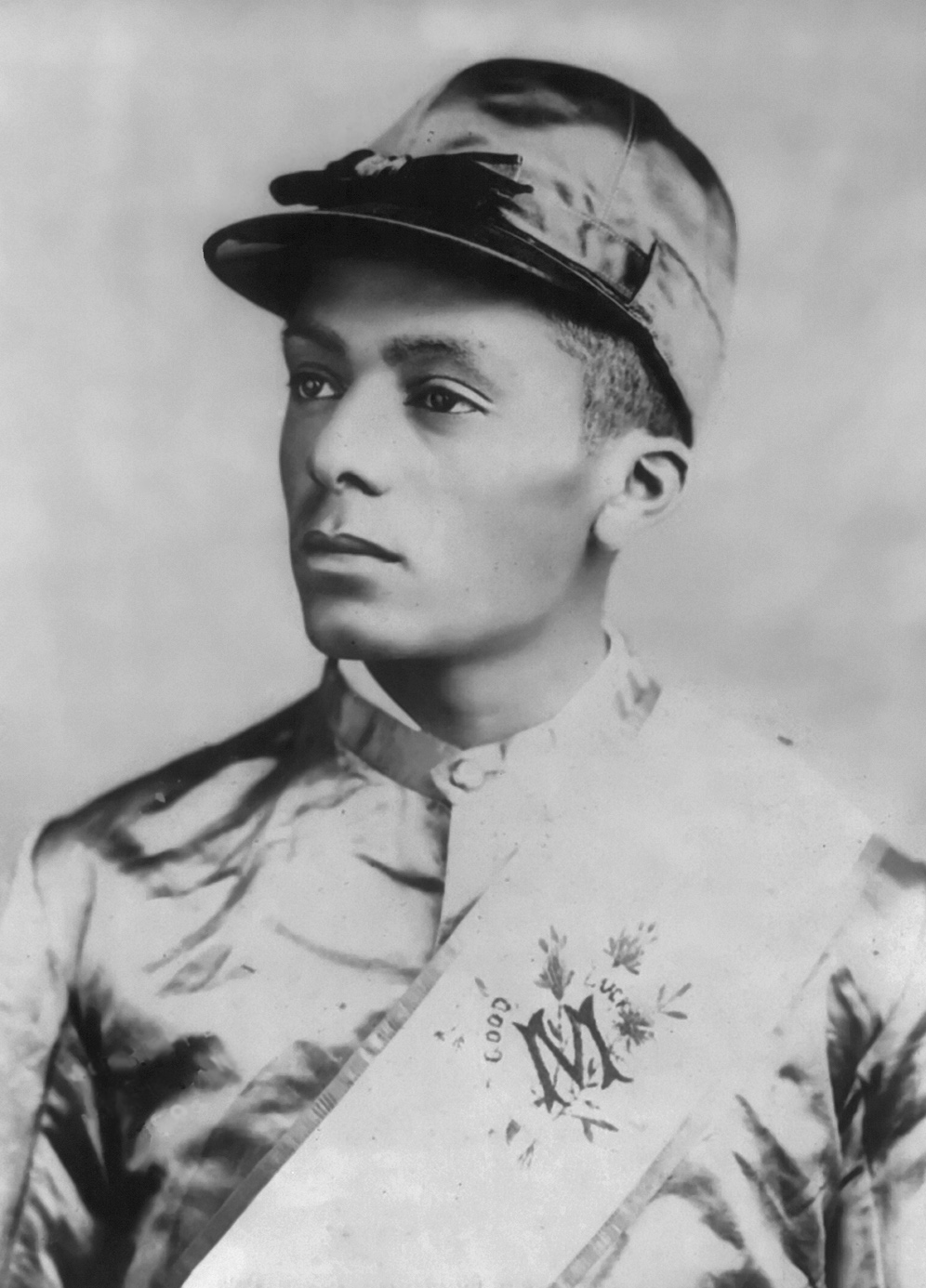 Isaac Murphy was born on April 16, 1861 as Isaac Burns near Frankfort, Kentucky on a farm to parents James Burns and a mother whose name is unknown.  Murphy was the first American jockey elected to Racing’s Hall of Fame in Saratoga Springs, New York and only one of two black jockeys (Willie Simms is the other) to have received this honor.

Burns’s father, a free black man, was a bricklayer and his mother was a laundrywoman.  During the civil war his father joined the Union Army and died in a Confederate prisoner of war camp.  After his father’s death, Burns and his mother moved to live with her father, Green Murphy, a bell ringer and auction crier, in Lexington, Kentucky.  Isaac Burns changed his last name to Murphy once he started racing horses as a tribute to his grandfather.

After the move to Lexington, Kentucky, Burns’ mother worked at the Richard and Owings Racing Stable.  Isaac Murphy started accompanying his mother to work and he was noticed by a black trainer named Eli Jordon, because of his small size.  The trainer prepared Burns for his first race at age fourteen.  His first winning race was on September 15, 1875 at the Lexington Crab Orchard.  He rode upright and urged his mount on with words and a spur rather than the whip. By the end of 1876, Burns, now racing under the name, Murphy had won eleven races at the Lexington’s Kentucky Association track.  In 1877 he won 19 races and rode in his first Kentucky Derby and received fourth place.  His 1879 win at the Travers Stakes at Saratoga Springs brought him national attention for the first time.

Isaac Murphy’s first Kentucky Derby win came May 27, 1884 at Churchill Downs.  Two more victories would follow in 1890 and 1891.   In 1884, Murphy also won the American Derby in Chicago, Illinois, at the time the most prestigious race in the nation.  He would repeat this feat in 1885, 1886 and 1888.  Throughout his career, Murphy rode 628 winners in his 1,412 mounts, including the three Kentucky Derby winners previously mentioned, four American Derby winners, and five Latonia Derby winners.  Murphy has the best winning average in history to date with better than 34 percent.

During the height of his career Murphy received an average yearly salary of $10,000-20,000 excluding bonuses, making him the highest paid jockey in the United States.  He lived in a mansion in Lexington.  It is believed that Murphy was the first African American to own a racehorse.  He owned several racehorses and invested in real estate as well.

On June 25, 1890, Murphy raced in the most memorable contest of his life.  Matched against a white counterpart, jockey Ed “Snapper” Garrison; the race would settle the debate as to which rider was the better jockey.  In a contest that had definite racial overtones, Murphy was victorious.

Murphy’s popularity soon fell after this race.  In August, 1890, just two month’s after Murphy’s victory, he was suspended for racing while intoxicated after falling off his horse in a race.  In the following years he also ran and won fewer races as he battled both alcohol abuse and weight gain.  In 1895 Murphy was suspended for the second time, because of intoxication. That same year he failed to win a single race and was forced to retirement.  Murphy died three months later from pneumonia.  At the height of his career Issac Burns Murphy was the best jockey of his time and still holds the best winning percentage of jockeys.  The Isaac Murphy Stakes (formerly the American Derby, which Murphy won on four occasions in the 1880s) was initiated in 1997 at Chicago’s Arlington International Racecourse.