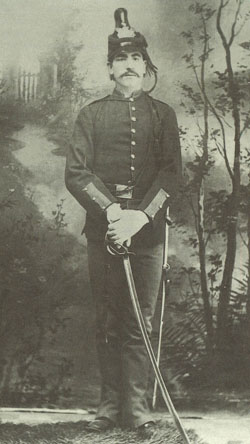 Edward “Sancho” Mozique was born a slave June 10, 1849, in Columbia, South Carolina. The family, a mother and six siblings, lived as slaves in Spartanburg, South Carolina between 1851 and the end of the Civil War.  Now free, they returned to Columbia.

Mozique believed his middle name, Sancho, came from his father, a French Creole from New Orleans.

Edward Mozique, at twenty-six, enlisted in the U.S. Army and was assigned to Company E, 10th Cavalry. He listed his trade as a carpenter and, after training, was sent to Fort Concho (near San Angelo) arriving in July 1875.

At the post the work week was seven days with rations consisting of beans, potatoes, beef or pork and the rare vegetable. Sancho was assigned to the post’s carpenter shop where he received $10.60 a month more than an ordinary private because of his skills. He was also a member in the 10th Cavalry band led by bandmaster Lt. Robert Smither. He was discharged on February 24, 1880.

Sancho remained in the San Angelo area and married Alice Johnson. He worked as one of the town’s first carpenters constructing many early buildings. When work slowed Sancho hired out as a cowboy and cook for ranches in the area.  He retired as a cook from the Sugg Ranch in 1931, to care for his ailing wife. Alice Mozique died in 1948.  Three years later Sancho contracted pneumonia and died on April 20, 1951, two months short of his 102nd birthday.