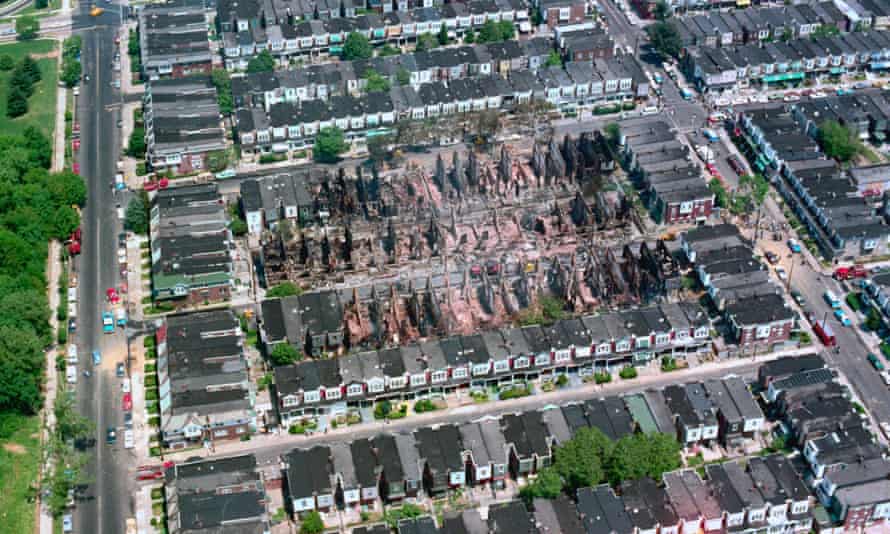 In March of 1976, while seven MOVE members were returning home from jail, police were called to their residence, claiming they were responding to a disturbance of peace complaint. A scuffle ensued, and while MOVE member Janine was trying to protect her husband Phil from being beaten by police, she was grabbed and thrown to the ground while clutching her three-week-old baby, Life Africa, in her arms. Janine was stomped on by police until she was nearly unconscious, and baby Life was crushed to death. No officer was ever charged with any crime.

MOVE members reorganized and moved to 6221 Osage Avenue in 1981. The house was a fortress, fortified with bunkers inside and on the roof. They continued to stage protests and broadcast their messages day and night by bullhorn from the rooftop bunker. Numerous complaints of disturbing the peace, unsafe living conditions, and child endangerment were filed against MOVE from neighbors and federal agencies. Several previous attempts at removal were met with violence by MOVE members. The city subsequently cut off water and power to the home and stopped picking up their trash, heightening tensions with the organization.

On May 13, 1985, city officials sent police to serve arrest warrants, with orders to carry out by extreme force. Nearby local residents were told to evacuate but could return to their homes the following day. Nearly five hundred officers in SWAT gear, backed by heavy artillery and an anti-tank machine gun, surrounded the block. A shot fired from inside the MOVE residence was met by a volley of over 10,000 rounds in 90 minutes, all shot into the home.

Five fire trucks pumped gallons of water through the basement and tear gas was thrown into the windows of the home. SWAT teams tried to blast holes in the walls of adjoining houses to gain entry. MOVE members hid in the basement of the home, holding children in the air to avoid drowning in rising waters. The all-day standoff led to the city dropping a C-4 bomb on the rooftop of the home. The bunker did not fall, but the roof of the home was engulfed in flames. Sixty-five neighborhood homes were destroyed and over two hundred residents lost their homes.

Eleven MOVE members, including John Africa and five children were killed. One adult, Ramona, and one child, Birdie (13), survived the bombing but were severely burned. Ramona was convicted of conspiracy and jailed for seven years. She later sued the city and was awarded a $1.5 million settlement in 1996.

Several articles, books, and two documentaries, The Bombing of Osage Avenue (1986) and Let the Fire Burn (2013), have been produced about the incident. In 2017, a historical marker was erected on the corner of Osage and Cobbs Creek Parkway, by the Pennsylvania Historical and Museum Commission. Plans for redevelopment by city officials and private companies have failed, and the destroyed homes remained boarded up.