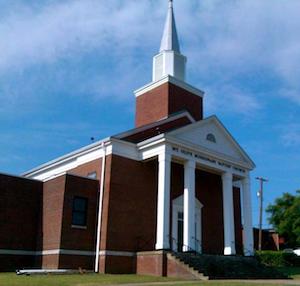 First Colored Baptist Mission began officially in 1841 as a quasi-autonomous branch of First Baptist Church. By 1847 black members were allowed to rent an old school building where they conducted services. Six years later in 1853, former slave Nelson G. Merry was ordained and became the unofficial pastor of the mission which by 1856 had 200 members.

Following the ratification of the Thirteenth Amendment to the U.S. Constitution which outlawed slavery in 1865, the white church leaders of First Baptist Church willingly granted its black members freedom to legitimately establish First Colored Baptist Church which became independent on August 13 of that year. First Colored Baptist Church became the first black church in the city and the state of Tennessee. Rev. Merry also became the church’s first official pastor.  At that time the church had 500 members.

For the next 19 years until his death in 1884, Rev. Merry led First Colored Baptist Church. His leadership coincided with the rapid growth of church membership. By 1872 the church had over 3,000 members. Rev. Tom R. Huffman succeeded Rev. Merry in 1884 but three years later (1887) he led dissident members in creating Mount Olive Missionary Baptist Church.

Initially Mount Olive Missionary Baptist Church did not have a designated place of worship but after engaging in a building campaign they were able to move to a permanent location in a basement at 908 Cedar Street. Following Rev. Huffman’s death, Rev. Charles H. Clark was elected pastor. During his tenure, a 1,200 seat church was built atop the basement. The church was chartered in 1897.

Over the years, Mount Olive has continued to expand its membership and influence in the Nashville area. After several relocations and under the visionary leadership of its many pastors Mount Olive is currently located at 3411 Albion Street in Nashville with Reverend Dr. Amos Thomas Griffey III as pastor.