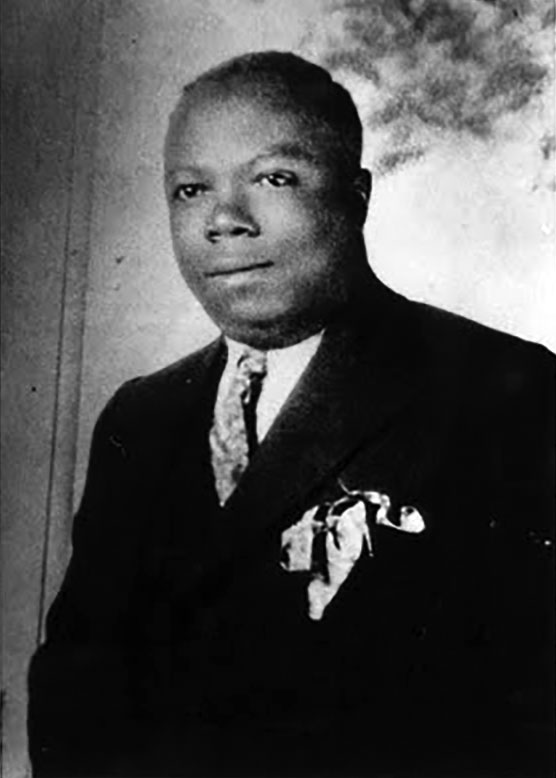 As one of the most renowned big-band leaders of the 1920s, Bennie Moten succeeded in developing the “Kansas City” sound in big-band jazz.  Born in Kansas City, Missouri on November 13, 1894, Moten spent most of his youth playing baritone saxophone in the city’s numerous brass bands.  In 1918, after switching to the piano and studying ragtime under students who trained with Scott Joplin, he formed the B.B.& D. Trio, who toured the Midwest throughout the 1920s.  In 1923 the trio recorded for the first time for Okeh Records in St. Louis.  Soon public demand for the group’s recordings, labeled as jazz music and specifically designed for dancing, made trio leader Moten a popular figure during this time in the South and Midwest.  By 1925 the group doubled with the addition of three new members and the following year it signed with Victor Records.  By this point the band had gained a national reputation.

Near the end of the 1920s Moten and his group migrated to New York City where they flourished.  When rival jazz band The Blue Devils, lost popularity in the early 1930s, Moten recruited some of its members including singer Jimmy Rushing, tenor saxophonist Ben Webster, trumpeter Oran “Hot Lips” Page, bassist Walter Page, and second pianist William “Count” Basie who eventually would become the bandleader.  These brilliant and accomplished musicians and arrangers were responsible for the band’s ten recordings in 1932.  Those recordings are seen as the beginning of what would be known as the “Basie sound” and featured such numbers as “Lafayette” and “Prince of Wails.”

Although the new musicians and their distinctive style overshadowed Moten and his original band members and irritated his early fans, the band’s success was unmistakable.  By 1935 Moten’s Kansas City Orchestra reached the height of its career.  That year they performed at Chicago’s leading jazz band venues, the Rainbow Gardens and the Grand Terrace Ballroom.  Moten however stayed behind in New York to have his tonsils removed.  He died on the operating table on April 2, at the age of 40.  His band was reorganized in 1936 as the Count Basie Orchestra.