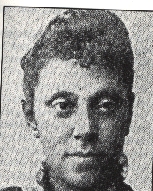 Gertrude E.H. Bustill Mossell was a teacher, author, and journalist born on July 3, 1855 in Philadelphia. The daughter of Charles and Emily Bustill, she came from a prominent family. She attended public schools in Philadelphia and eventually the Institute for Colored Youth and the Robert Vaux Grammar School. Upon graduation, Bustill delivered the class oration entitled, “Influence.”

“Influence” so impressed African Methodist Episcopal (AME) Bishop Henry McNeal Turner, editor of the denomination’s newspaper, The Christian Recorder, that he published the oration there and invited Bustill to contribute poetry and essays to the newspaper.

During the 1870’s Bustill taught for seven years at public schools in New Jersey, Pennsylvania, and Kentucky. She also simultaneously maintained her career in journalism; Bustill was a contributor to the Philadelphia Press, Philadelphia Independent and Philadelphia Echo on issues related to African American women.  Eventually she contributed to the New York Age, the Indianapolis World as well as the A.M.E. Church Review.

In 1883 Bustill married Nathaniel F. Mossell, a prominent Philadelphia physician.  The couple had two children.  The demands of marriage and raising a family resulted in a brief absence from journalism, but by 1885 she incorporated journalism into her life again when she became woman’s editor for the New York Age. In 1889 she left the Age and became the woman’s editor of the Indianapolis World from 1891 to 1892.

Throughout her career, Mossell encouraged the growth of black newspapers and suggested that the African American press had a special mission within black America and therefore needed to excel in reporting and attempt to reach a larger audience. She suggested the latter could be achieved through a more extensive national network of news dealers, agents, and selling of papers by newsboys.

Mossell was also concerned with attracting women to journalism. In 1886, she wrote columns urging women to submit articles to publications. Her success in the field of journalism led her to publish two books; The Work of Afro-American Women in 1894 and Little Dansie’s One Day at Sabbath School in 1902. The Work of Afro-American Women, her most prominent publication, looked into the future to project women’s roles in the twentieth century, particularly in suffrage, journalism and higher education.

In addition to her career in journalism, Mossell was involved in social welfare activities, including her role as charity fund director for the Frederick Douglass Hospital in Philadelphia.  In 1895 she led a successful fundraising drive of more than $30,000 for construction of the main hospital building. She also founded the Bustill Family Association and organized the National Afro-American Council’s branch in Philadelphia.