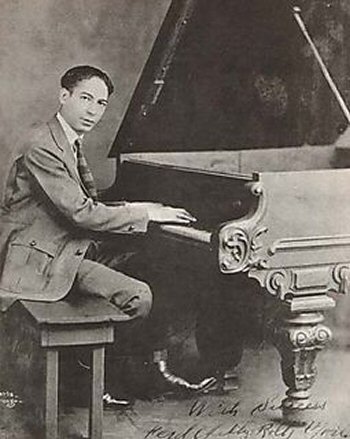 Ferdinand Joseph La Menthe Morton, more popularly known as “Jelly Roll” Morton, was an influential early 20th Century composer and pianist. Jelly Roll, the son of Creole parents, E.P. La Menthe and Louise Monette, was born in Gulfport, Mississippi in 1885. His father, E.P. Morton, was a trombonist who encouraged his son’s musical abilities. Morton’s early childhood was somewhat turbulent as he spent much of his time with his wandering father, who had deserted Louise Monette.

Morton showed fairly prodigious musical talent, gaining proficiency in many instruments quickly. He learned the harmonica at age 5, and his repertoire grew to include the violin, drums, trombone, and his claim to fame, the piano. Jelly Roll’s bohemian lifestyle under his father’s influence continued until his father’s disappearance. Jelly Roll returned to Gulfport to live with his mother and step-father, Willie Morton, until his mother’s death when he was 14. At that time, he and his two sisters were in the care of his godmother, Eulalie Echo, and his Aunt Lallie. Like many poor youth, he quickly found menial employment for 3 dollars a week.

In addition to this employment, he also began making money by performing in the gambling dens and other houses of ill repute, for wages of over twenty dollars a night. His talents as a musician quickly became his primary source of income, and also led to his eviction from the familial home when his Aunt realized the source of his income.

As Morton traveled around the South, he came in to contact with many other musicians who influenced his style and ability. In 1902 when he was 17, Morton composed “King Porter Stomp,” a well-recognized tune of the era. Over the next few years, Morton continued to play at clubs and other venues across the South while he arranged to have his compositions published out of Chicago.

By 1917, Morton had moved to Los Angeles where he ran several thriving businesses with his girlfriend of the time, Anita Gonzales. Despite his prosperity in Southern California, Morton grew restless and moved to Chicago.

In 1929 Morton married Mabel Bertrand, a professional dancer who had spent time in Europe and who is credited with limiting at least some of the excesses in his life.  For a time Mabel Morton traveled with her husband’s band, “Jelly Roll Morton and His Red Hot Peppers.” Morton continued to record, and is now one of the most well-documented of the early jazz musicians.  Many of his recordings survive today in the Library of Congress.

In 1939, Morton was stabbed twice, in the head and above the heart, at the Jungle Inn in Washington, D.C. He never fully recovered from those injuries, and two years later, on July 10th, 1941, he died while once again in the company of Anita Gonzales in Los Angeles.