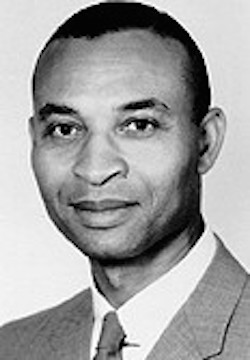 John Morrow was a teacher, scholar, and diplomat who became America’s first leader at two key postings, the West African country of Guinea, and the United Nations Educational, Scientific, and Cultural Organization (UNESCO).

He was born John Howard Morrow on February 5, 1910 in Hackensack, New Jersey to John and Mary Hayes Morrow. After receiving his Bachelor’s degree (A.B., 1931) from Rutgers University, Morrow also earned his Master’s degree (M.A., 1942) and his Doctoral degree (Ph.D., 1952) both from the University of Pennsylvania. He also studied in France, receiving an advanced certificate from Sorbonne, University of Paris (1947).

Morrow began his career as a secondary school teacher in Trenton, New Jersey (1931-1945) and Bordentown, New Jersey (1935-1945). He then moved to Alabama where he became a Professor of Modern Languages and Head of the Department at Talladega College (1945-1954). Atlanta, Georgia was Morrow’s next home as he taught at Clark College in Atlanta (1945-1956). He then headed to the North Carolina College at Durham, now called North Carolina Central University (1955-1959). Throughout these academic postings, Morrow developed “a scholar’s command of Latin, French, and Spanish, and a reading knowledge of German and Portuguese.” Morrow also engaged in research on French colonial administration, including in West Africa, for many years.

This expertise and language abilities led to what many saw as a questionable appointment by President Dwight Eisenhower in 1959. In that year, Eisenhower appointed Morrow, as the first U.S. Ambassador ever, to the newly independent African country of Guinea. Having never previously held a government job, Morrow was nonetheless unanimously confirmed by the U.S. Senate as the nation’s Ambassador to this country which had been called “the new battleground in the East-West Cold War.” Morrow’s nomination was also problematic for many because he was a black man being appointed to such a key post at that time. A Washington Post editorial called the appointment of black man to this key African nation condescending, and suggested that the appointment called for a more serious expert, completely ignoring Morrow’s considerable expertise about French colonial Africa.

Ambassador Morrow led U.S. efforts in Guinea from 1959-1961, including expertly liaising with the Guinean President Sékou Touré who was becoming increasingly distrustful of U.S. intentions in his nation. Ambassador Morrow also spent significant time leading efforts to combat anti-American sentiments in the new nation, and against advances of communist nations in the region. In the final year of his ambassadorship (1961), he also served as Alternate U.S. Delegate to the United Nations.

After Guinea, Morrow was sent to France by President John F. Kennedy, to serve with the personal rank of Minister, as the first ever U.S. Permanent Representative to UNESCO (1961-1963). Following Paris, Ambassador Morrow returned to the United States, and served as Chairman of the Foreign Service Institute’s Foreign Service Officers University Studies Program (1963-1964). He returned to academia when he was called back to his alma mater, Rutgers University, in 1964. He served as Professor of Romance Languages and Chairman of its Department of Foreign Languages until his retirement in 1978.

Morrow was married in 1936 to Ann Rowena Davis. They had two children, Jean Rowena and John Howard Jr. Ambassador Morrow passed away on January 11, 2000.