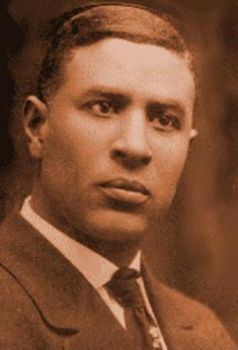 Inventor, entrepreneur, and publisher Garrett A. Morgan Sr. received patents for a three-position traffic signal and a safety hood that was designed to aid breathing in smoke-filled areas. He gained national attention when he utilized his mask to rescue men trapped during a tunnel explosion in 1916.

Garrett Augustus Morgan was born in 1875 or 1877 in Paris, Kentucky to farmers Sydney and Elizabeth Morgan. Garrett received an elementary school education and left home at the age of fourteen, finding work in Cincinnati, Ohio as a mechanic. In 1895, he moved to Cleveland, Ohio, where he worked for twelve years repairing sewing machines and in 1901 invented a sewing machine belt fastener.

In 1907, Morgan established his first business, a sewing machine sales and repair shop. He soon expanded with a tailoring business and later the Morgan Skirt Factory that employed more than thirty people. His second major discovery came while exploring a way to reduce friction between sewing needles and woolen fabric. He found that a chemical solution he developed to straighten the woolen fibers of textiles also straightened hair. In 1913, he formed the G.A. Morgan Hair Refining Cream Company that sold a line of hair care products.

During the same period, Morgan was working on other projects, including a breathing device that would protect firefighters against smoke inhalation. In 1914, he received a patent for the Morgan Safety Hood and formed the National Safety Device Company, generating interest in his invention through demonstrations at public safety exhibitions. It was used most notably on July 25, 1916, when he was asked to help rescue Cleveland Water Works miners trapped in a tunnel beneath Lake Erie. Morgan and his brother Frank, along with another volunteer, used the safety masks to descend into the tunnel and rescue several survivors.

During the next decade, Morgan continued to invent while publishing the Cleveland Call, a weekly African American newspaper he established in 1916. It became the Cleveland Call and Post in 1929 and is still in publication today. He was also at work on other solutions to modern-day problems, including traffic safety, after witnessing an accident between a horse carriage and an automobile. In 1923, he received a patent for the G.A. Morgan Safety System, an improvement on prior traffic signals that included a caution indicator for all traffic to stop simultaneously. Other inventions included a women’s hat fastener, a curling comb, and a cigarette extinguisher.

Suffering from failing health in his later years, perhaps due to exposure to chemicals while testing his safety hood, Morgan died on July 27, 1963. Garrett Morgan was a member of Alpha Phi Alpha Fraternity. His papers are in the archives of the Western Reserve Historical Society in Cleveland, Ohio.