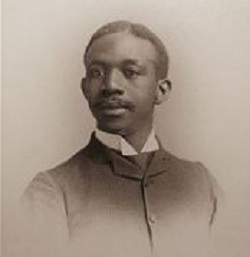 Clement Garnett Morgan, a lawyer and civil rights leader, was born in 1859 to slave parents, Clement and Elizabeth Garnett Morgan in Stafford County, Virginia. Shortly after the Emancipation Proclamation in 1863, the family moved to Washington D.C., where Morgan went to Preparatory High School for Colored Youth. With no way to use his diploma, Morgan became a barber. Unsatisfied with this work, Morgan moved to St. Louis, Missouri where he taught school for four years. Still unsatisfied, he decided to return to school.

In 1885, Morgan moved to Boston and attended Boston Latin School. Graduating from there with honors, he began attending Harvard College in 1886. Morgan won the prestigious Boylston Prize for oratory, and was selected as class orator. His $1200 in college expenses were paid for through the scholarships. After graduation, Morgan spent the following three years in the Harvard Law School, from which he received his LL.B. degree in 1893. Although Morgan was the third African American to receive a law degree from Harvard, he was the first to obtain degrees from both Harvard College and Harvard Law School. In 1897, Morgan married Gertrude Wright, a native of Springfield, Illinois.

Morgan strongly believed that every individual needed the opportunity to develop their intellectual talents. He adamantly opposed Booker T. Washington’s accommodationist theories and thus joined ranks with other African American leaders such as William Monroe Trotter and W.E.B. Du Bois in challenging the Tuskegee educator. Morgan was one of Trotter’s attorneys in his trial for supposedly causing the Boston Riot (July 1903).

In 1905, Morgan became a founding member of the Niagara Movement (1905-1910), and headed its Massachusetts branch. In 1909, Morgan followed Du Bois into the National Association for the Advancement of Colored People (NAACP). Between 1912 and 1914, Morgan served as one of the few black members on the executive committee of the Boston branch of the NAACP.

For the remainder of Morgan’s life, he continued his fight for African American rights through his profession and through protest activities (he was especially active in the protest against the showing of the film The Birth of a Nation in Boston). Clement Garnett Morgan died at Massachusetts Homeopathic Hospital in Cambridge, Massachusetts on June 1, 1929.