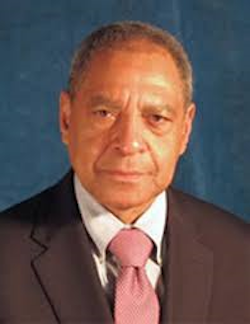 Ambassador George E. Moose’s career in international diplomacy resulted from his spending a college summer in the 1960s building a three-room schoolhouse in Tanzania.  The high point of that career came in 1983 when President Ronald Reagan nominated him to be U.S. Ambassador to Benin and later Ambassador to Senegal.

George Moose was born in New York City, New York on June 23, 1944, to Robert and Ellen Amanda Lane.  Moose attended public schools in the city and then graduated from Grinnell College in Iowa in 1966.

After graduation Moose became a Foreign Service Officer in 1967. His first overseas assignment was Vietnam at the height of the Vietnam War.  Moose served from 1969 to 1971, first as Refugee Program Advisor at the U.S. Embassy in Saigon and later as Political Officer at the U.S. Consulate General in Da Nang.  He returned to the United States and worked for the U.S. State Department Board of Examiners from 1971 to 1972 and then served as a Political Officer at the U.S. Embassy in Bridgetown, Barbados between 1972 and 1974.

From 1979 to 1980 Moose was an International Fellow with the Council on Foreign Relations and then from 1980 to 1983 he was Deputy Counselor for Political and Security Affairs at the U.S. Mission to the United Nations in New York City.

On October 7, 1983, President Ronald Reagan nominated Moose as Ambassador to Benin. After U.S. Senate confirmation he arrived in Cotonou, the capital of Benin, and presented his credentials on November 4, 1983.  He completed his mission on July 7, 1986.

Returning to the United States he next served (on loan) as a member of the Policy Council for the Una Chapman Cox Foundation between 1986 and 1987 then he returned to the State Department as Deputy Director, Office of Management Operations from 1987 to 1988.

On April 28, 1988 President Reagan nominated Moose to be U.S. Ambassador to Senegal.  He arrived in Dakar, the capital, and presented his credentials on October 13, 1988.  Moose served as Ambassador until May 21, 1991.  He then returned to the U.S. and served as U.S. alternate representative to the United Nations Security Council (1991-1992).  In 1993 he became a Diplomat-in-Residence at Howard University in Washington, D.C.

On March 22, 1993, President-elect William J. Clinton nominated Ambassador Moose as Assistant Secretary of State for African Affairs.  Confirmed by the Senate on March 31, 1993 and sworn in on April 2, he was the first African American to hold this post. Leaving this position on August 22, 1997, he was appointed Representative of the U.S. to the European Office of the United Nations on November 18, 1997. He served in this capacity until 2001.   During this time, he was also a Member of the Board of Directors of the African Development Foundation (1993-1997).  He then returned to Howard University as Senior Fellow in the newly created Ralph J. Bunche International Affairs Center (2001-2002).

Since 1981 Moose has been married to Judith Roberta Kaufmann.  He is fluent in French and Vietnamese.  Ambassador Moose received an Honorary Doctor of Laws in 1990.