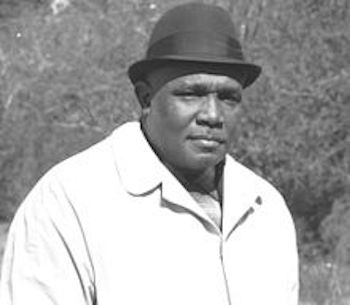 Amzie Moore was a prominent figure in the Mississippi civil rights movement and voter registration campaign. He was born on September 23, 1911, on the Wilkins plantation near Greenwood, Mississippi, to black sharecropper parents. When Moore was fourteen, his mother died leaving him to care for himself by picking cotton in Drew, Mississippi. While living with different family members and friends, Moore attended Stone Street High School in Greenwood. He performed household chores and worked part-time jobs at a café, hotel, and gin.

In 1935 Moore accepted a federal post office job in Cleveland, a rare position for African Americans to assume in the Deep South. In the same year, his yearning for black economic development and empowerment drove his interests in politics. When Moore registered to vote in 1935, an almost impossible feat for Mississippi blacks, he could vote only in general elections and not the primaries. Experiencing the economic downturn of the Depression, Moore switched from the Republican Party to the Democratic Party in support of Franklin D. Roosevelt. In the early 1940s, Moore secured a federal loan to build a brick house with in-door plumbing and married Ruth Carey, a beautician, whom he divorced in 1961.

When the United States entered World War II, Moore joined and served in a segregated army from 1942 to 1946. His experiences in China, Burma, and India influenced his decision to bring about social change when he returned to the United States. In 1946 he returned to Cleveland and opened a combination service station, beauty shop, and restaurant with a loan from the Standard Life Insurance Company. His success in business led him to start a movement for economic development with T.R.M. Howard, Aaron Henry, and Medgar Evers. In 1951 they founded the Regional Council of Negro Leadership, and, five years later, Moore was elected president of the Cleveland chapter of the National Association for the Advancement of Colored People (NAACP).

The 1960s civil rights movement in Mississippi benefited from Moore’s teachings and networks. When Robert “Bob” Moses, a New York teacher and leader of the Student Non-Violent Coordinating Committee (SNCC), came to Mississippi in 1960, he met a very receptive Moore. He persuaded SNCC to turn from sit-ins and other direct action protests to voter registration. He taught students how to target the black population, especially in rural areas; who to contact; and how to effectively move in and around Delta cities like Ruleville, McComb, and Greenwood. Moore soon became a major adviser to SNCC in the state and helped recruit young locals to work alongside their northern counterparts. His grassroots strategies helped the organization to launch a major voter registration drive during Freedom Summer.

After the passage of the Voting Rights Act in 1965, Moore continued his social and economic activism. He retired from the post office in 1968 and began to organize programs for Head Start and the Child Development Group of Mississippi. He worked with the National Council of Negro Women and helped obtain low-income housing, the Turnkey III Project, in East Cleveland. He later married Mary Chatman. Amzie Moore died in Bolivar County Hospital in Cleveland on February 1, 1982. He was sixty-nine years old.

In 2001 the city of Cleveland renamed Shady Grove Park to the Amzie Moore Park in honor of his legacy.  In 2016 the Bolivar County Board of Supervisors, the Mississippi Department of Archives & History, Delta State University, and Saint Peter’s Rock Missionary Baptist Church collaborated to restore Amzie Moore’s house and turned it into the Amzie Moore House Museum & Interpretative Center.