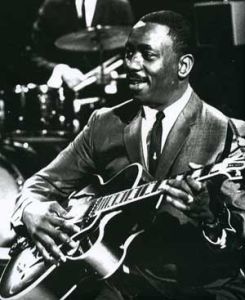 Wes Montgomery was a jazz guitarist whose natural genius and distinctive sound earned him recognition as one of the most important jazz musicians of the 20th century. Montgomery was born on March 6, 1925 in Indianapolis, Indiana into a musically inclined family. Although he was given his first instrument as a child, Montgomery’s interest in guitar would not be ignited until he was 19 years old and married. After first hearing records from swing and jazz guitarist Charlie Christian, he bought an affordable guitar and amplifier and taught himself how to play.  Partly in order to lower the volume for neighbors and because he found it awkward to use a pick, he soon adopted his own style of using his right thumb to pluck the strings. Although somewhat unconventional, the softer and deeper tone it produced still serves as one of his trademarks.

Montgomery was hired to play at an Indianapolis club six months after he learned the guitar. He was recruited in 1948 to tour with the Lionel Hampton band, but after two years decided to return home to his wife and children. He developed a local following playing at Indianapolis nightclubs. In 1957 he recorded for the first time with his brothers, Monk and Buddy, who were also professional musicians.  They recorded as the Montgomery Brothers on the Pacific Jazz label.  Two years later alto saxophonist Cannonball Adderley heard The Montgomery Brothers and persuaded a larger label, Riverside Jazz to record them.  The Riverside recordings, The Wes Montgomery Trio (1959) and The Incredible Guitar of Wes Montgomery (1960), launched Montgomery’s international career.

Throughout the early 1960s Montgomery toured with his trio. Beginning with Full House in December 1961, Montgomery released a series of live recordings which emphasized his brilliance as a jazz performer. These recordings also marked the initiation of a more commercial future for the musician, especially after Riverside faced financial difficulties and Montgomery switched to a new label in 1964, Verve, in New York City.  The addition of big band and string orchestra arrangements won Montgomery a Grammy Award in 1965 for his album Goin’ Out of My Head.  In 1967, his album A Day in the Life became the best-selling jazz LP of that year as well.  Despite the monetary success of his later recordings, Montgomery decided to leave Verve and return home to Indianapolis to work with his brothers. During his flight back on June 16, 1968, Wes Montgomery suffered a heart attack and died in Indianapolis at the age of 43.