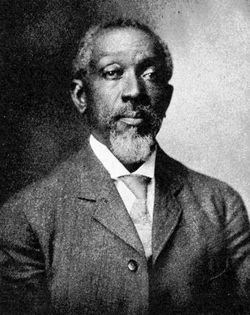 Isaiah Thornton Montgomery was an African American leader best known for founding the all-black town of Mound Bayou, Mississippi and for his public endorsement of black disenfranchisement. Montgomery was born enslaved on May 21, 1847 to Benjamin Thornton and Mary Lewis Montgomery on the Hurricane Plantation at Davis Bend, an area along the Mississippi River near Vicksburg, Mississippi. Hurricane Plantation was owned by Joseph E. Davis, older brother of future Confederate States of America President Jefferson Davis. Benjamin and Mary were unusual for the era; they were both born in Africa, they were both literate, and had access to Joseph Davis’s extensive library. They passed that literacy on to their son Isaiah.

By the beginning of the Civil War, Hurricane Plantation had 350 enslaved people including Montgomery and his parents. His father Benjamin was the plantation mechanic, machinist, and wholesaler in New Orleans, Louisiana; he also managed its cotton transactions and those at Jefferson Davis’s nearby Brierfield Plantation. Young Isaiah worked as Joseph Davis’s valet and clerk from 1857 to the beginning of the Civil War in 1861.

By 1862, as Union forces steadily moved down the Mississippi River from Memphis and upriver from occupied New Orleans, Joseph Davis fled the region, leaving Benjamin Thornton to manage the plantations. Eventually the Montgomerys fled as well, to Union-occupied territory and then to Cincinnati, Ohio. Isaiah Montgomery, however, remained on the Union vessel that transported his parents north and eventually served as Union Naval Admiral David D. Porter’s cabin boy.

In 1865, after the war ended, 18-year-old Isiah reunited with his parents at Davis Bend, along with other former Hurricane and Brierfield Plantation ex-slaves. The community began to successfully farm land they had formerly worked as slaves but now controlled as freedpeople. In 1867, led by Benjamin and Isiah Montgomery, they raised $300,000 to purchase Hurricane and Brierfield from a now nearly destitute Joseph E. Davis.

Under the leadership of Benjamin and Isiah Montgomery, Davis Bend (as the two plantations were called) became a “community of cooperation,” as these freedpeople made the area one of the region’s top cotton producers. This unique experiment lasted until 1877 when hardening racial politics combined with falling cotton prices, floods, and the death of Benjamin Montgomery sent Davis Bend into rapid decline. For the next decade Isiah Montgomery searched for another Mississippi location where he could establish an independent black community.

In 1887, Montgomery and cousin Benjamin Green co-founded Mound Bayou. For 25 years, this 30,000-acre colony in Northwest Mississippi was home to nearly 800 black farmers. Montgomery was Mound Bayou’s patriarch, protecting it from white terrorism through political cooperation with white supremacist politicians and businessmen. In 1890, for example, while serving as the only black delegate to the Mississippi Constitutional Convention, he publicly endorsed the disenfranchisement of 123,000 black voters, hoping to trade their rights for protection for Mound Bayou from neighboring white encroachments and violence. His accommodation to disfranchisement was praised as pragmatic by white political leaders North and South but he was harshly criticized by northern black leaders like T. Thomas Fortune. One rising black southern leader, Booker T. Washington, however, was inspired by Montgomery’s actions and promoted the strategy in his Atlanta Compromise speech in 1895.

Unlike Washington, Montgomery never completely repudiated black political participation. In 1904 at the age of 57 he served as a Mississippi delegate to the Republican National Convention, and the following year he persuaded President Theodore Roosevelt to briefly visit Mound Bayou by train. Nonetheless, for the next two decades, Montgomery remained publicly silent on the Jim Crow laws sweeping across his region.

When he died on March 5, 1924, at his home in Mound Bayou, he was praised by a few prominent planter politicians and unmourned by African Americans beyond his circle of family and friends.